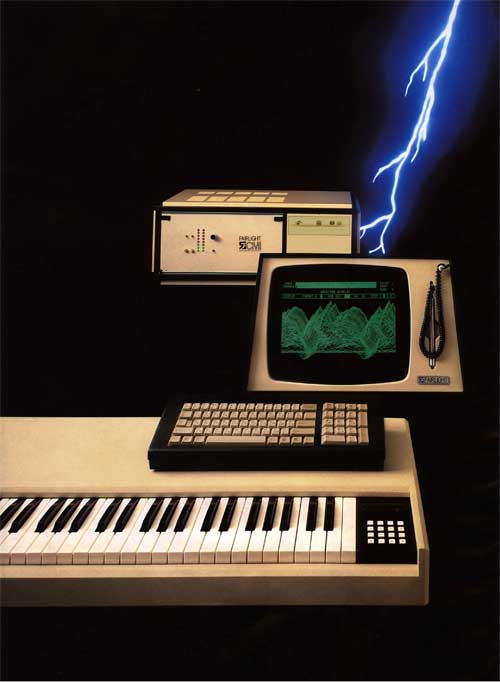 Fairlight co-founder Peter Vogel has put up a teaser about a 30th anniversary limited edition version of the Fairlight CMI, a pioneering polyphonic sampling instrument.

Vogel calls this image a pre-production mockup for the Fairlight CMI Series 30A.

If you’ve got more info or other thoughts on the Fairlight CMI Series 30a, leave a comment below!

There have been discussions from time to time about replicating the CMI using a software emulation. These efforts will have limited success because the “Fairlight sound” relies on the peculiarities of the hardware used in the original design.

In the days when I was the designing CMI hardware, my greatest challenge was to minimise the distortions and artifacts that were inherent aspects of the hardware available at that time. In effect, we struggled to make the Fairlight sound less “Fairlight”. So the intimate details of what makes a Fairlight sound like a Fairlight are indelibly etched in my brain.

When Fairlight brought out the Crystal Core Engine last year, my imagination ran wild. Here was a tiny board with enormous capabilities that could be configured to faithfully reproduce the CMI hardware in its FPGA (Field Programmable Gate Array). Every bit of the 1980’s CMI hardware, the essence of its sound, could be reconstructed faithfully in digital hardware form.

To fully appreciate the astounding potential of the CC-1, download the brochure here:

I also recently discovered that ALL the IP relating to the original Fairlight CMI including all of the hardware and filter designs, sample libraries etc are still retained by Fairlight.au in Sydney.

So I have been wondering if it would be worthwhile to develop a faithful reproduction of the CMI on the “Virtual Hardware” of the CC-1?

This would perform identically to the original CMI series II or III, but run on a PC fitted with the Crystal Core card. The MIDI input would come directly into the CC-1 so there would be no problem of latency introduced by the PC.

At this stage I’d like to “feel out” the market to assess the level of interest in this project and whether the significant investment in R&D will be worthwhile.

So my question is, what do you think of this idea? How would a Fairlight CMI at this sort of price be received by the market? Who would the buyers be and how would I tap into them?

What do you think?

11 thoughts on “The Limited Edition Fairlight CMI Series 30A”