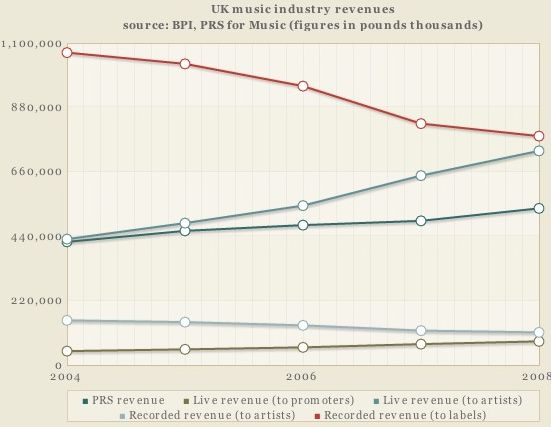 via the Times UK:

This is the graph the record industry doesn’t want you to see.

It shows the fate of the three main pillars of music industry revenue – recorded music, live music, and PRS revenues (royalties collected on behalf of artists when their music is played in public) over the last 5 years.

We’ve broken each category into two sub-categories so that, for any chunk of revenue – recorded music sales, for instance – you can see the percentage that goes to the artist, and the percentage that goes elsewhere. (In the case of recorded music, the lion’s share of revenue goes to the record label; in the case of live, the promoter takes a cut etc.)

Hopefully, this analysis – and there’s more on the nuts and bolts of our method below – sheds some factual light on the claims and counter-claims that are paranoically sweeping across the music industry establishment, not least that put forward by the singer Lily Allen in this paper recently – and the BPI – that artists are losing out as a result of the fall in sales of recorded of music.

The most immediate revelation, of course, is that at some point next year revenues from gigs payable to artists will for the first time overtake revenues accrued by labels from sales of recorded music.

Why live revenues have grown so stridently is beyond the scope of this article, but our data – compiled from a PRS for Music report and the BPI – make two things clear: one, that the growth in live revenue shows no signs of slowing and two, that live is by far and away the most lucrative section of industry revenue for artists themselves, because they retain such a big percentage of the money from ticket sales.

The long and short of it – the music industry’s “decline” isn’t as simple as record labels would like us to believe, and that musicians are getting a bigger slice of the music industry pie than they have in the past.