Remember that DAW poll we mentioned the other day?

The one where Ableton Live was blowing all other DAW’s out of the water?

That post seemed to have generated a lot of attention.

Especially from FL Studio fans – who’ve responded by pushing Image Line‘s own DAW to the top.

It may have helped that Image Line did a little social engineering on Twitter: 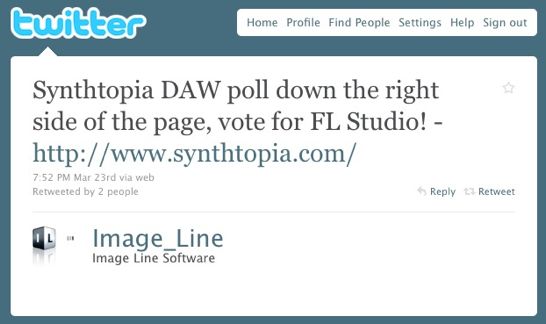 And they asked their 20,000 fans on Facebook to help rig the results:

No hard feelings to Image Line – they’re just trying to bury the competition.

But – given that Image Line has had a bit of fun with us and that the 2010 Synthtopia DAW Poll may reflect a bit of an FL Studio bias as a result….we would not be too surprised or shocked if other DAW makers and users decided to respond with a DAW-poll death-blow. Hya!