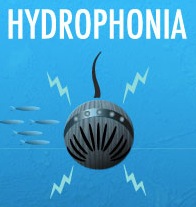 Most of us are aware of the pollution around us. However, few are aware our oceans are flooded with  noise  from sonar, shipping, seismic surveys, military activity and more. The Hydrophonia Festival was founded to build awareness about ocean noise that is disrupting marine life around the world.

These artists and speakers are scheduled for Hydrophonia Barcelona 2010:

Composer Kim Cascone, in an interview with Jack Hertz, had this to say about hydrophones and his interest in Hydrophonia:

I’ve been interested in hydrophone recording for some time now but it wasn’t until I stumbled across this book, How to Build & Use Low Cost Hydrophones by Frank Watlington, in a used book store that I decided I wanted to build one for myself and do some recording, since I live by the ocean.

Once I made a couple of hydrophones and did some recording with them I wanted to increase the quality so I did some research and found other artists also interested in hydrophone construction and recording. I was surprised that so many artists were experimenting with hydrophones of various types and using them for recording all sorts of underwater sounds.

I’m not all that interested in recordings of whales or dolphins but more in strange phenomena or processes we aren’t aware of. And that of course is when I learned about the growing issue of ocean noise and its devastating effect on all marine life.

You can read the full interview at Synth.me. See the Hydrophonia site for more information on the festival.

If you’ve got experience with hydrophones, too, leave a comment and let us know about it!