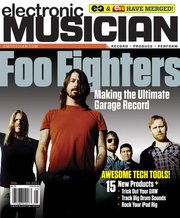 The latest issue of Electronic Musician magazine came today, and it’s got me scratching my head a bit.

Electronic Musician has a solid history of covering, you know, electronic musicians.

It’s benefited from the contributions of writers like Gino Robair, Craig Anderton and Geary Yelton over the years, and I’ve enjoyed reading their often in-depth coverage of electronic music gear and electronic music artists.

So I took one look at this month’s issue of Electronic Musician, above right, and asked myself, “W.T.F.?”

Don’t get me wrong. I like the Foo Fighters. Dave Grohl is a badass of American rock.

They’re not at the very tippy top of the list.

Do you think that Armin van Buuren and Tiësto and Sasha and Carl Cox and Klaus Schulze and Robert Rich and Sven Väth and Daft Punk and Justice and The Chemical Brothers and Fatboy Slim and Brian Eno and Depeche Mode and Jean Michel Jarre and Giorgio Moroder and Trent Reznor and Moby and Wendy Carlos and Gary Numan and Vangelis and Derrick May and The Human League and Tomita and Air and Grandmaster Flash and Trevor Horn and B friggin’ T and Boards of Canada and Throbbing Gristle and Yello and The Crystal Method and Herbie Hancock and Mike Oldfield and Popol Vuh and Manuel Göttsching and Devo and Gorillaz and Lords of Acid and Thievery Corporation and Edgar Froese and Lamb and William Orbit and Jean-Jacques Perrey and David Holmes and Propellerheads and Juno Reactor and Laurie Anderson and Public Enemy and The Residents and Philip Glass and Pauline Oliveros and John Chowning and Morton Subotnick and Amir Baghiri and DJ Lisa Lashes and Alison Goldfrapp and Morcheeba and the rest of the bajillion people that make electronic music were all unavailable for this month’s issue?

Looking inside this month’s Electronic Musician magazine, it turns out that the publisher had to combine two of their magazines, EQ magazine and the old EM magazine, because of declining sales. Maybe they had to use interviews that they already had in the works at EQ or something, because, this month’s issue also features “scuzz-rock” artists The Kills, Swedish rockers Peter Bjorn and John and indie-popster Adam Goldberg.

What do you think? Is it too harsh to write of the revamped Electronic Music magazine, based on one issue? Or has this thing completely jumped the shark?