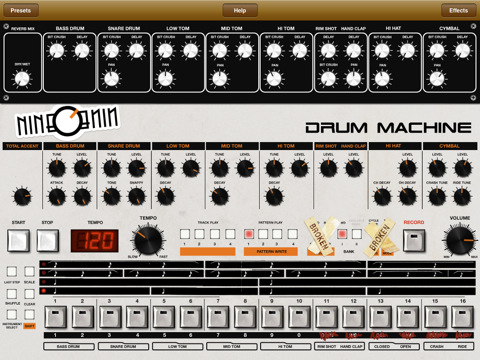 That’s what the creators of nineOnine – a virtual TR-909 for iPad – are hoping. nineOnine is intended to emulate not only the sound of the classic TR-909, but also the logic of programming and saving rhythm patterns.

While a couple of bucks for a virtual 909 sounds like a steal – nineOnine needs some additional features in order to become a no-brainer. MIDI features are missing in action and “Track Play is preset and can not be user defined.”

Developer Mirko Trkulja promises some significant enhancements with the next update, though, including:

These ‘enhancements’ seem like features that, at this point, should be part of just about any 1.0 music app.

At this point, even $1.99 doesn’t seem like a bargain for nineOnine. We’ll be interested to see how this app develops, though. If the feature set does mature, this could be a welcome addition to iOS musicians’ toolkit.