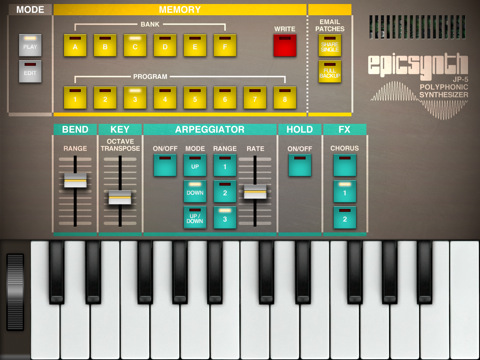 It looks like Martineau has been listening to electronic musicians and understands that you want iOS apps with MIDI support. Here’s what he’s got to say about Epic Synth:

EpicSynth was inspired by legendary analog synthesizers of the 1980s. It’s designed from the ground up to be EASY TO USE, POWERFUL, and FUN!

EpicSynth distills the essence of subtractive synthesis into a simple yet powerful app. Epic Synth’s sound architecture is simple enough for beginners to learn about synthesis yet powerful enough to satisfy experienced sound modelers. Its straightforward interface is never an obstacle and lets you focus on the essential: the pleasure of creating new sounds!

We’ve got no clue if this new software synth sounds epic – or if half the other new iOS music apps sound epic – because the developers don’t offer audio demos or video previews of their apps.

We read the descriptions in iTunes, we check the developers’ sites and we search in YouTube. No audio or video demos to be found.

Developers – your software synths represent a lot of work on your part – and we’d like to see that work pay off.

Because we just want to know what your music app sounds like. Like a guitarist wants to play a guitar before he buys it. It’s that simple.

So, connect a cheap audio cable from your iPhone to your computer, open your app and record a minute of audio demoing the presets in your app. Then post it on SoundCloud or YouTube and put a link to your demo in your description in iTunes.

And we promise – if your app’s sound is as awesome as your app description – we’ll buy it.

But we’re cheap and we want to hear that demo.