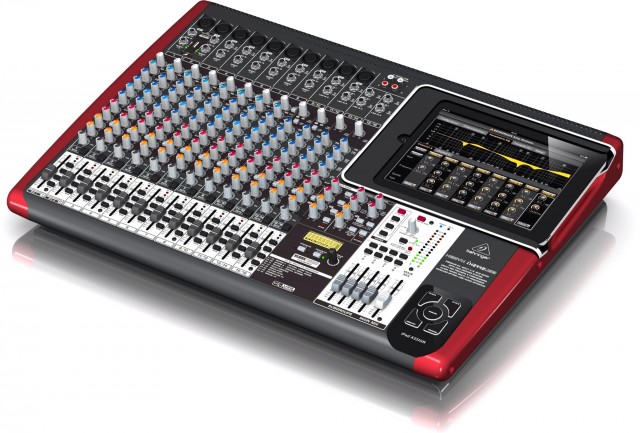 The new XENYX iX Series, which include the XENYX iX3242USB, iX2442USB and iX1642USB, feature a built-in iPad docking station designed to send signal to and from the iPad with a wide range of routing options.

The new XENYX iX Series USB mixers make it possible to record and mix using its built-in stereo USB audio interface. You can connect these mixers directly to a PC or Mac computer via a single USB cable to record any signal source connected to the mixer.

All iX mixers include a dual-engine KLARK-TEKNIK FX processor with 32 editable presets such as reverb, chorus, flange, delay, pitch shifter and multi-effects. The iX mixers use the iPad to control the new KLARK-TEKNIK FX Processor App, giving users easier control of EQ’s, compressors and reverbs and a full spectrum analyzer.

The iX series mixers also feature XENYX mic pre amps, which Behringer says offer 130 dB of dynamic range, with a bandwidth that extends from below 10 Hz to 200 kHz.

Other features include ‘British’ style 3-band channel EQ and ‘one-knob’ compression on each channel.

Pricing and availability are to be announced.