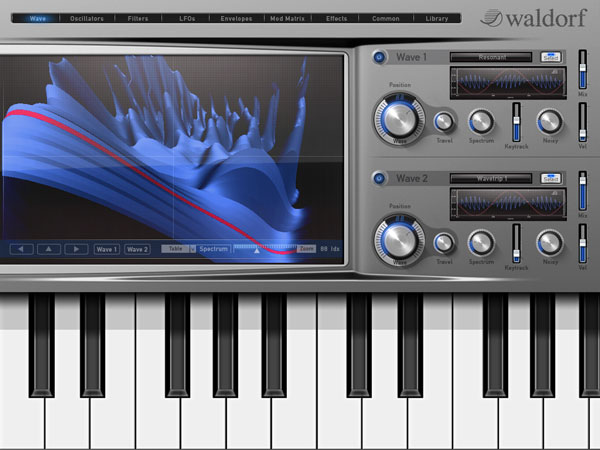 Waldorf, creator of a long line of respected synths, and iOS developer Rolf Wöhrmann (Tempo Rubato) are working on a new wavetable synthesizer for the iPad, according to a report by GearJunkies.

The application will offer new options for sound manipulation, based on 3D modeling and Waldorf’s latest research:

An innovative approach to wavetable synthesis allows for the transposition of the spectrum and the balance of periodic and sound spectra entirely independent from a waveís position. The existing wavetable technology is thereby extended by two new dimensions, and it allows for formant shifts as well as numerous other unheard sounds.

Also, unlike with typical wavetable instruments, the number and length of waves in a wavetable will no longer be restricted. It ís the era of wavetable synthesis V2.0!

This app will support a huge number of hardware MIDI interfaces, e. g. all Core MIDI compatible interfaces by IK Multimedia, iConnectMIDI, MIDI Mobilizer II by Line6, ioDock or the Camera Connection Kit by Apple, as well as proprietary interfaces such as the SynthStation by Akai.

The new Waldorf wavetable synth for iPad is expected to be available this summer. Pricing is to be announced.