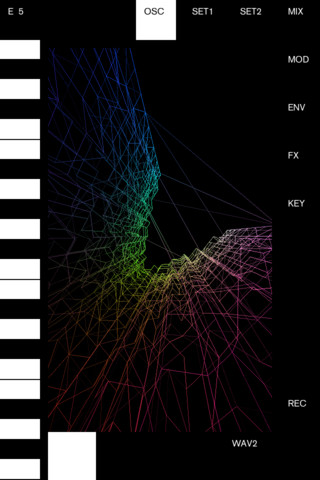 The Strange Agency has introduced a new software synth for iOS, HyperSpace.

HyperSpace uses a unique algorithm to generate images from sound. It works similarly to a harmonograph, but uses its 3 voice oscillators instead of pendulums to create images.

Each oscillator is mapped to a dimension in 3-D space. Playing a single note creates a wave, like on an ordinary oscilloscope. Playing two notes at once creates a plane as with the harmonograph, and playing a three note chord creates a volume.

There are two oscillators to crossfade between. These can be set to standard shapes as with older synths, but HyperSpace also lets you sculpt the waves with touch. Changing the wave shapes of course alters the sound, but it also alters the generated imagery.

Here’s a preview of HyperSpace 3D:

HyperSpace 3D is $.99 in the App Store. If you’ve used HyperSpace 3D, let us know what you think of it.

Brosious’ Law – The components you have will expand to fill the available space.