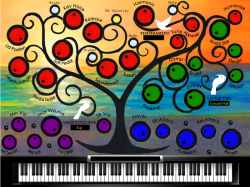 Sound Magic has released an update to Thor for Mac – its virtual recreation of the ‘Thor’ Steinway piano.

This is the sound of the piano “Thor” developed from the Steinway D numbered CD443, the piano that Vladimir Horowitz loved most. The CD443, Mr. Horowitz’s last piano, was selected by the artist for his own personal home use. When he was first introduced to this instrument, Mr. Horowitz had reservations about the piano’s action (which was rather heavy) but came to love the instrument so much that, when he briefly considered concertizing in 1989, he planned to take the CD443 with him. This piano was used for recording sessions made at his home in both 1988 and 1989.

Piano Thor featured an amazing dynamic range which other pianos were hard pressed to compete with. It had more “bite” when it was played really hard but it produced a soft, singing tone when played softly. And Steinway’s famous singing tone and bell like sympathetic resonances made it a truly great piano. This vast dynamic contrast and its lighting fast response won this superb instrument the name “Thor”, the Norse god of storms and thunder.

For more information and demos, see the Sound Magic site.