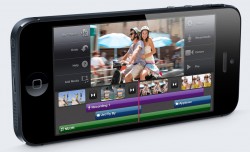 The biggest technology news this week, at least in terms of the coverage we’ve seen at sites like TechMeme, has been Apple’s introduction of the iPhone 5.

We haven’t posted anything on it yet at Synthtopia, because the new iPhone is an evolutionary refinement of an already capable device, rather than something that brings radically new possibilities to musicians.

A post at Palm Sounds, a blog that focuses on mobile music making, made us take another look at the new device. It suggests that, while Apple has made the new iPhone incrementally better, Android and Windows alternatives seem to be going nowhere as music devices:

There is no way now to easily step off the Apple machine if you’re into mobile music. It’s where all the great apps are, and I can’t see that changing for quite a while now.

So I decided that as I have no real choice but to stick with iOS, I may as well go for a new iPhone 5.

While we’re reluctant to write off other mobile platforms, iOS is maturing as a music platform while the alternatives are still struggling to be viable.

What do you think? Do musicians interested in mobile music making “have no real choice but to stick with iOS”?

If not, let us know what devices and apps you think make compelling alternatives!

65 thoughts on “Is The iPhone 5 Now The Only Real Option For Handheld Music Making?”