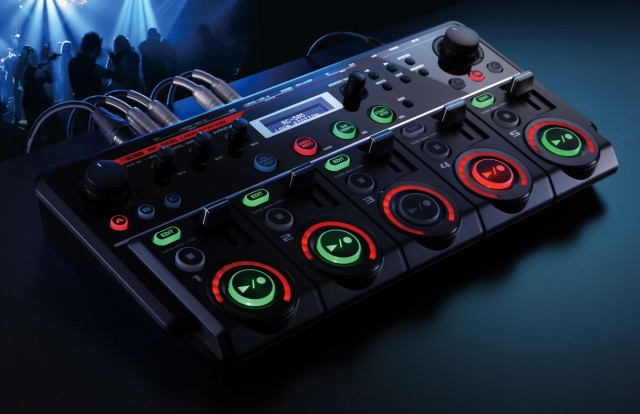 Musikmesse 2013: BOSS has introduced the RC-505 Loop Station, the newest addition to its lineup of live looping devices.

The RC-505 Loop Station features five phrase tracks, onboard effects, rhythms, and a tabletop design suited. In addition, the RC-505’s extensive MIDI control options and ability to import audio phrases via USB open up a wealth of options.

Here’s an intro video for the new RC-505 Loop Station:

The RC-505 is equipped with five phrase tracks that can play simultaneously, the most yet in a BOSS Loop Station. Independent record/overdub/play and stop buttons for each track let users capture loop performances with easy fingertip control. Dedicated volume faders allow for quick level adjustment of track playback, while the ALL START/STOP button controls all five loop phrases with a single command. Up to three hours of stereo recording is possible in a single track.

A large selection of built-in effects allows loopers to enhance their sounds as they perform. INPUT FX such as ROBOT and VOCODER offer unique textures while recording loops, while TRACK FX like VINYL FLICK and BEAT REPEAT provide real-time post-processing for dynamic DJ and sampler effects. Six dedicated buttons (three for INPUT FX and three for TRACK FX) can be loaded with favorite effects for one-touch access while looping.

99 phrase memories provide storage for phrase track data, playback and effects settings, and more. 85 different onboard rhythms can be used as backing for loop recording, with a large selection of odd-measure beats for advanced performing. The rhythm part can be routed to the rear-panel PHONES jack only, giving users a dedicated click track for monitoring purposes.

Inputs include an XLR microphone jack with phantom power, mono/stereo instrument inputs, and an AUX mini-jack for connecting a music player, smart phone, or other stereo device. All inputs can be used simultaneously to capture a variety of different sources into loops.

The USB port allows users to connect to a computer and import/export WAV audio phrases. This provides backup for RC-505 loop recordings, as well as the ability to load up RC-505 phrases with pre-made tracks for on-the-fly, sampler-style performing. The RC-505’s USB port also provides USB-Audio and USB-MIDI functionality, letting users interface with their favorite DAW software for audio recording and MIDI synchronization.

Track recording and many other RC-505 parameters can be controlled externally. Foot switches (one BOSS FS-6 or two FS-5Us; optional) or an expression pedal (Roland EV-5; optional) can be connected via the CTL 1,2/EXP jack on the rear panel. MIDI I/O is provided for a wide range of integration with other devices, such as MIDI foot controllers, drum machines, or another RC-505.