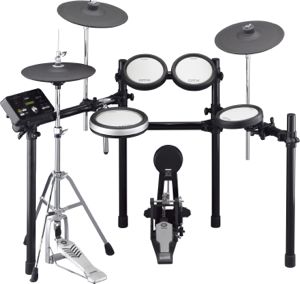 Yamaha premiered its revamped DTX-502 electronic drums at Musikmesse, in Frankfurt, Germany. Based on the DTX-PAD, the kits feature including newly designed tom pads, a lighter-weight steel rack and a new drum trigger module.

With almost twice the wave ROM and more than 250 additional sounds than the previous model, the new DTX502 drum trigger module is the first to incorporate drum and cymbal samples that have been optimized for DTX by Yamaha’s sound engineers. The system lets users import audio samples and MIDI files for further expandability.

During the development phase, Yamaha created laser technology to analyze drum strokes and precisely tune the trigger settings, so that the playing experience on each of these sets provides “a more natural feel.” It also includes advanced features such as cymbal muting, natural swells and smoother snare drum rolls.

“Most of the changes to the new DTX502 series can’t be seen but they can be heard and felt,” said Athan Billias, Director of Marketing, Yamaha Corporation of America, Pro Audio & Combo Division. 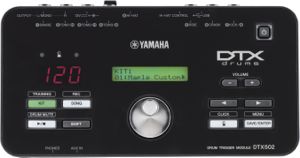 The new DTX502 module (pictured) has a streamlined front panel layout, and features plug-and-play USB connectivity for easy “interfacing” with a computer. The newly-designed DTX502 can be easily mounted to acoustic drum hardware using a standard multi-clamp for use in a hybrid acoustic-electronic drum set.

The DTX502 series also includes new training and educational functions, and practice routines for drummers to improve their playing.

The DTX522K, the most affordable model in the series, includes the three-zone XP80 8″ DTX-PAD snare and three newly designed TP70 7.5″ tom pads. The new TP70 pad is softer and quieter, yet more expressive, than the previous model. This kit, which comes with three-zone, choke-able ride and crash cymbals, is the first electronic drum kit ever to feature a three-zone hi-hat pad.

The next kit in the lineup, the DTX532K, uses the same drum pads and rack system as the DTX522K but features an upgraded hi-hat and two large PCY135 13″ three-zone choke-able cymbal pads. The RHH135 vertical motion hi-hat pad, which mounts to the included Yamaha HS650A hi-hat stand, provides a setup that more closely matches an acoustic kit.

The top model in this series is the new DTX562K, which includes the large cymbals and real hi-hat pad, upgrades the toms to an all-DTX-PAD configuration with three XP70 7″ pads.

One thought on “Yamaha DTX-502 Drums Premiered At Musikmesse”

An intellectual is someone who can listen to the “William Tell Overture” without thinking of the Lone Ranger.