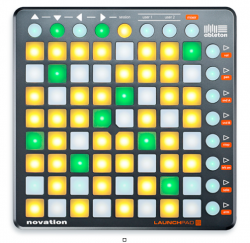 Simon Halstead, Novation’s Marcom Manager tells us, “The Launchpad S has “vastly brighter” LEDs, a significantly faster refresh rate and is now class compliant – meaning it will now work with other software (e.g FL Studio 11) and critically, with the iPad – so it integrates with our new Novation Launchpad app for iPad. It’s also powered by the iPad.”

Here are some video demos of the Novation Launchpad S in action:

Here’s a tutorial that looks at the setup for the above performance video:

Finally, here’s a look at using the Launchpad S with an iPad:

The grid of 64 pads allows hands-on control of music software such as Ableton Live and FL Studio. The controller is specially designed for launching loops/clips and triggering effects as well as getting full mixer control including volume, effects sends, pan, mute, solo and track arm. The grid can also trigger drums and one-shot samples. A second user mode allows users to freely assign pads to control other software parameters.

Novation has also developed a Launchpad iPad app that enables loop triggering and effects from your iPad, independently of Ableton Live. Launchpad S can be connected to, and powered by, an iPad using a standard Camera Connection Kit. The app features a 1GB sample pack of loops curated by Loopmasters, ranging from drum samples to artist packs across a variety of modern musical genres.

The Novation Launchpad S will be available worldwide this month for a list price (MSRP) of $169.99.