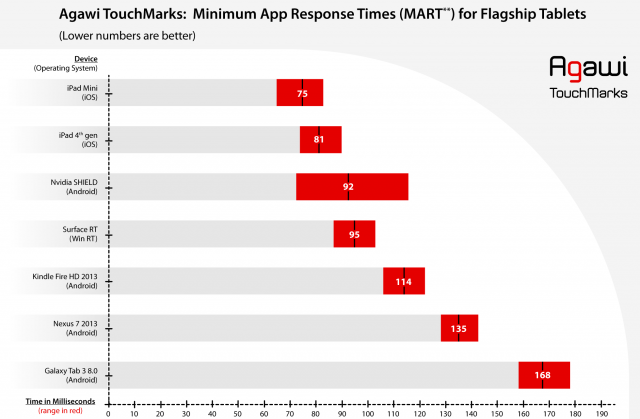 Touchscreen latency measures the length of time it takes for devices to react to touches. Faster is better, especially for musicians that do realtime music-making on mobile devices.

They found that the iPad Mini and iPad 4 are the most responsive devices, followed closely by the Nvidia Shield (Android) and Surface RT. The remaining Android devices they tested were relatively laggards, with up to twice the latency of the iOS devices.

If you primarily use your tablet for reading, watching videos or browsing the web, then shop around and pick the best tablet – iOS, Android, Windows 8 – that suits your needs. With their lower price points and high PPI screens you may find an Android tablet works perfectly for you.

If, however, you’re into latency-sensitive applications like games or interactive music apps, then your best bet might be an iPad.

We would like to see how the Surface Pro 2 ranks in Agawi’s latency test. The Surface RT has not been embraced by musicians, but Microsoft’s Surface Pro 2 has better chances, since it runs legacy Windows apps.

Check out the results of the testing and leave a comment with your thoughts!