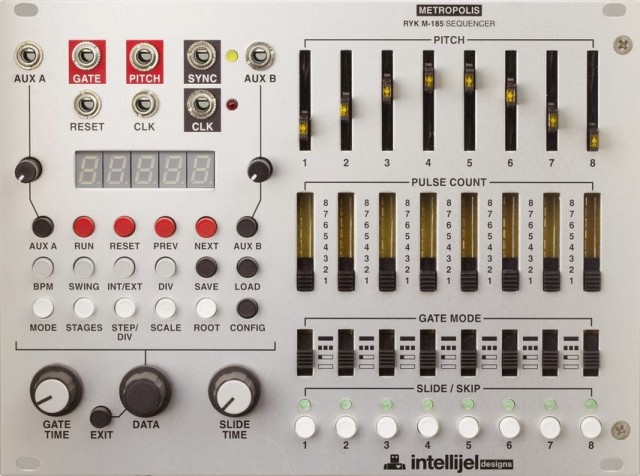 Intellijel has announced that its new Metropolis Eurorack step sequencer is now shipping.

The Metropolis is a unique and powerful musical sequencer inspired by the Ryk M-185 (a Roland System 100m format sequencer.) but with many additional enhancements and functions.

Here’s a demo of the Metropolis in action:

The Metropolis comprises eight STAGES, each with its own assignable gate mode, pulse count and pitch value. Each stage can also have a special slide or skip function activated too. The slide functionality is a constant time portamento very similar to the Roland TB303 (unlike most synths/sequencers that use constant rate portamento) which produces a very musical and interesting result.

In addition to the base sequencer settings set with the sliders and switches there is a full menu of controls and auxiliary modifiers that allows the user to control and manipulate the sequence in many powerful ways including sequencer direction modes, pitch quantization and scale manipulators, clock dividers, shuffle and much more.

The Metropolis step sequencer is priced at $580. See the Intellijel site for details.