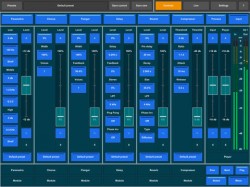 Master FX is intended for real-time processing of sound from one or two external instruments or microphones separately while playing or singing. It can also mix instrument sound or voice with pre-recorded audio tracks. Master FX can also be used as a sound processor within a variety of other musical applications as it supports Audiobus. This allows the app to be used as an effects processor as part of an iOS-based multitrack recording system.

Here’s a demo of Master FX in action:

If you’ve used Master FX, leave a comment and let us know what you think of it!