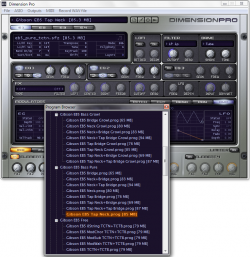 Here’s a sample of the bass sounds in the expansion pack:

The EB 5-String uses Gibson’s unique Tuned Coil Tap pickup technology to provide eight distinct sounds that form the basis of a group of eight “Pure” sampled instruments. Each note, for each sound, was sampled individually, allowed to sustain (no looping), then trimmed for the best tradeoff between sustain and “reasonable instrument size.” All of the instruments also include ten slides and one FX sound, while the modwheel emulates pulling back the EB’s tone control. Eight additional “Growl” programs add a “gritty” overdrive to the eight pure sounds, for a total of 16 programs.

Anderton describes the Gibson EB 5-String, his sampling and soft instrument development process, and more in this post over on the Cakewalk blog.

The Gibson EB 5-String Bass Expansion Pack, available now, retails for $39.95, but is available for an introductory price of $19.95 (through February 28, 2014; download only). For additional information, visit the Cakewalk website.