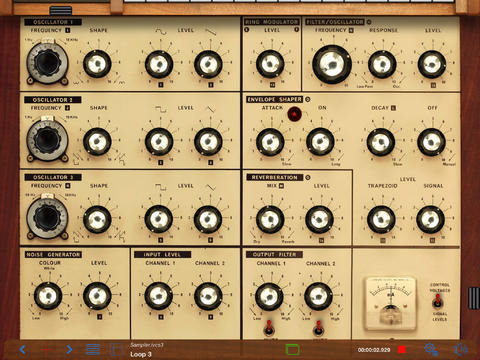 apeSoft has introduced iVCS3 – a software version of the classic EMS VCS3.

The VCS3 was created in 1969 by Peter Zinovieff’s EMS company. The electronics were largely designed by David Cockerell and the machine’s distinctive visual appearance was the work of electronic composer Tristram Cary.

The VCS3 was one of the first portable commercially available synthesizers (portable in the sense that the VCS 3 was housed entirely in a small, wooden case).

The VCS3 was popular among progressive rock bands and was used on recordings by The Alan Parsons Project, Jean Michel Jarre, Hawkwind, Brian Eno (with Roxy Music), King Crimson, The Who, Gong, Pink Floyd and many others.

The official info on iVCS3 covers the original VCS3, as much as it does the software version:

Although the VCS3 is often used for generating sound effects, due to lack of built-in keyboard, EMS made external keyboard controllers for melodic play.

The DK1 in 1969 was an early velocity sensitive monophonic keyboard for VCS3 with an extra VCO and VCA. Later it was extended for duophonic play, as DK2, in 1972. Also in 1972, Synthi AKS was released, and its digital sequencer with a touch-sensitive flat keyboard, KS sequencer, and its mechanical keyboard version, DKS, were also released.

Here’s a video introduction to iVCS3:

If you’ve used iVCS3, leave a comment and let us know what you think of it!

24 thoughts on “iVCS3 Recreates The EMS VCS3 Synthesizer For iPad”