In this video interview, musician Imogen Heap demonstrates her MIDI gloves, which are being developed for production as a Kickstarter project. The interview was filmed at Heap’s home studio outside London.

“These beautiful gloves help me gesturally interact with my computer,” says Heap.

Pushing buttons and twiddling dials “is not very exciting for me or the audience,” she adds. “Now I can make music on the move, in the flow and more humanly, and more naturally engage with my computer software and technology.” 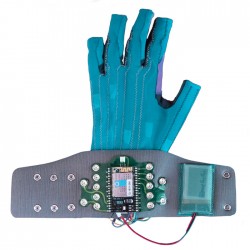 Each gesture-control glove contains a WiFi-enabled x-IMU board, developed by x-IO Technologies, containing an accelerometer, a magnetometer and a gyroscope. These work together with a series of motion sensors, incorporated into the fingers of each glove, that track the degree of bend and the spread of the fingers.

The gloves can also understand postures such as an open palm, a finger-point or a closed fist.

The latest version of the gloves feature e-textile technology, where sensors and wiring are integrated into fabric. Heap is now exploring how to make further use of electronically conducting textiles, to reduce the number of hard components in the gloves.

Heap’s Kickstarter campaign aims to raise £200,000 to develop and produce a limited production run of Mi.Mu gloves. If successful, she will make both the hardware and software open source, allowing people to develop their own uses for the technology. See the project site for details.