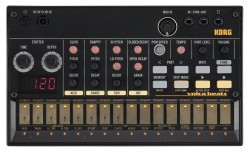 Reader Darren Glen contacted us to let us know about something interesting he noticed on the Korg Volca Beats circuit boards.

Some Volca Beats owners are disappointed by the analog drum machine’s snare sound. Glen and others have identified a mod that gives the snare a less distorted sound. Here’s Glen’s demo of the mod:

Glen says the hack fixes a missing component on the Volca Beats boards:

Boards are missing a key component on the board, which specifically relates to the snare, namely C78. This component has been left off during manufacture, seemingly by robot manufacturing error. There are solder pads and a space for this missing component, as well as a screen printed label for it, C78, which refers to a capacitor, but this capacitor is missing, and is right in the middle of the snare circuit.

With it missing, the snare sounds distorted, crackly, “burnt”. When a 104 capacitor is placed directly across this position C78, the snare distortion problem is …fixed…and it sounds clean and sharp and crisp.

If you are doing my mod, then instead of soldering the 104 cap across the resistor, instead place it in its original location that the designer envisioned, the currently empty location C78. it will be much easier to solder there and you will not risk damaging the SMD resistor in my original explanation. Thus the snare mod should be easier now to perform by all users.

Note: We spoke with Korg about the board design and they confirmed that the Volca Beats is shipping as designed. “This was a purposeful design decision which gave us flexibility during voicing, and while that position does indeed exist on the board, it was not intended to be filled in the final production version.” See our update for more info!