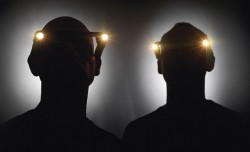 Brothers Paul and Phil Hartnoll announced today that they’re hanging up their iconic torch-glasses and parting ways, as Orbital, for the final time.

Having first broken up in 2004, the Hartnolls reunited to play the Big Chill, celebrating 20 years of their DIY techno track ‘Chime’ in 2009.This led to extended touring and a performance before millions at the opening of the Paralympics, with Professor Stephen Hawking on vocals.

Phil Hartnoll is focusing on his DJing career, which has taken him recently to Thailand, Japan, Korea, Dublin, New York, France and London.

“I am really enjoying playing a mixture of my own exclusive Orbital remixes mixed with some great new dancefloor tracks,” says Phil Hartnoll. “I have also been discovering so much talent along the way and look forward to potential collaborations.”

Paul Hartnoll is focusing on a new project, 8:58.

“Nothing lasts forever and it’s time to stop,” says Paul Hartnoll. “Since finishing the soundtrack with Flood & PJ Harvey for the BBC One television show Peaky Blinders, I’ve now got my own new project, ‘8:58’ which I’m really excited about. It’s a continuation of my work from the past 25 years, but with a new vitality taking me on to something fresh, mixed with the best of what I’ve put into Orbital.’

17 thoughts on “Orbital Calls It Quits, But The Music Goes On And On”