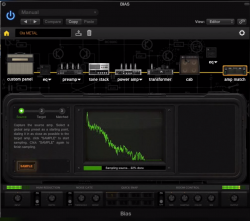 “Instead of providing a fixed number of amp models, BIAS Desktop represents an entire new concept on guitar sound: guitar players can now virtually design their own amps, using Amp Matching Technology to capture their golden tube amplifiers,” says BIAS Product Manager Calvin Abel, “and finally they can share or download thousands of amp models on ToneCloud, also we are currently working with worldwide artists and studios to expand this platform.”

Here’s a video that looks at amp matching with BIAS Desktop:

Details are available at the Positive Grid site.