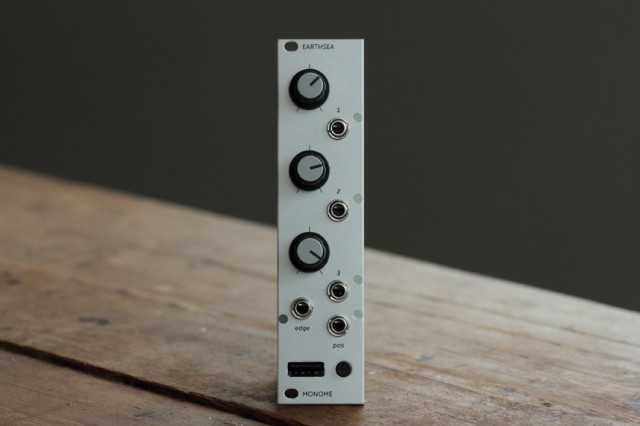 Here’s a video demo of earthsea in action:

Here’s what they have to say about earthsea:

earthsea is a platform for playing, looping, and manipulating control-voltage gestures, which may take the form of melodies and timbral transformations.

a monome grid is plugged into the front panel of the module, serving as a complete interface. looped patterns continue to run when the grid is disconnected, facilitating hot-swap connection to other monome-enabled modules during performance.

built upon a map of tones, the grid becomes a playing surface for melodies. the edge output provides various gating modes including a fixed interval and drone mode.

multi-press gestures invoke shape-memories. three channels of cv memory are set by turning panel knobs per shape. instantly recall cv sets with different shapes, or glide between them with independent slew per channel and shape.

patterns of notes and shapes can be recorded into a bank of sixteen slots. gate, retrigger or loop playback while performing additonal notes or shapes atop. recall previous patterns from the bank, or perform the bank directly. patterns can also be performed across the keymap with arpeggiate mode, shifting the root note and retriggering the pattern.

shape-memories and all recorded patterns are storable to internal flash memory for instant recall on power-up. eight full presets can be stored and dynamically loaded.

earthsea is available for US $320. A monome grid controller is required.