Warner Jepson’s Buchla Christmas is a previously unreleased collection of electronic holiday music, created on a Buchla modular synthesizer in 1969.

The music was created by Jepson at Mills College Electronic Music Studios in December 1969. It was created on the Buchla 100 analog modular synthesizer and recorded to Ampex PR-10 tape recorder. 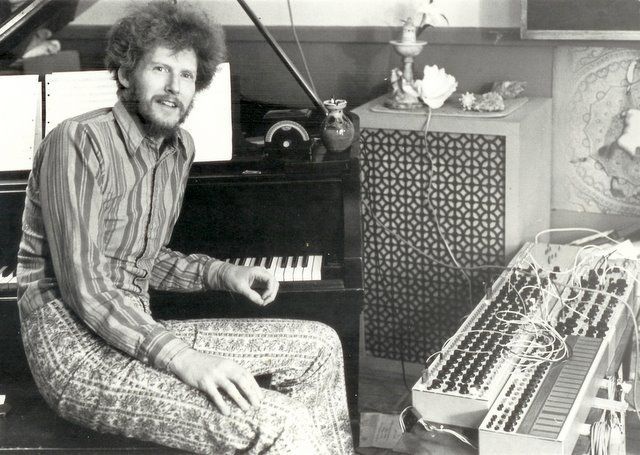 Here’s what Jepson (shown in vintage photo above, with Buchla synthesizer) has to say about the recordings:

“I’d been playing Buchla music in various galleries for openings, as well as MOMA openings. They liked them enough, since the music gave a good time, was infectious and totally new to people. So MOMA asked me to provide music for their annual Christmas party for Children on a Saturday morning.

So I took off one evening for Mills College where the Buchla now was kept to take up my usual time time slot of 8pm. At the time use of the Tape/Buchla room was very loose; I could stay as long as I liked after the building closed at 10; sometimes I would be there almost till dawn. There were times, however, when I’d go back home at midnight dejected at having found nothing exciting.

This night I was already across the Bay Bridge when I realized I hadn’t brought any Christmas music, no carols! I was going to have to remember what I could. Turned out I knew enough of them to play with.

The Buchla doesn’t’ have a keyboard like a piano (with twelve notes to the octave), just slits in a metal plate with two tuning knobs to give each slit a pitch or a pair of pitches. I didn’t have to reconstruct all twelve notes of a scale, just the notes needed in the song. Tuning what few notes I needed for each tone was fairly easy. But one carol sounded like church bells because it one of the notes sounded out of tune as some church bells because their tuning doesn’t fit with a tempered tuning so goes out of tune with the other notes. At first I thought this a problem, but since it did resemble church bells it decided it added to the charm. Other sounds reminded me of lighter caroling bells as I imagined in old Germany or the Alps, at least, as I remembered hearing them.

The most pleasure came when I incorporated the sequencing module that gave a tune rhythm that it never had nor would have, since it came from a synthesizer with a different kind of creativity that a human wouldn’t have. The unusual rhythm added a kick to the carol.

I didn’t have enough carols to make a long enough session so I added here and there, especially at the end, some synthesizer music that I’d previously made on the Buchla that sounded shimmering and might evoke a starry sleigh filled night.”

You can preview the album via the embed above or buy it via Bandcamp.

One thought on “A Vintage Buchla Christmas”