Mindflood, creator of the the Patchblocks programmable music system, recently announced an equity investment crowdfunding opportunity via the Crowdcube platform.

In essence, Crowdcube is a site designed to open up investing in UK startups to anyone. Companies create online pitches and anyone can invest, with investments starting at £10. 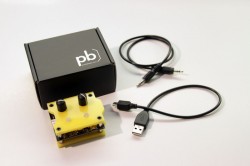 Mindflood had a goal of raising £100,000 for about 13% equity in the company. They met that target in less than a week. The Mindflood pitch is open for another 56 days on Crowdcube.

Note:  You have to create a Crowdcube account to see full details of the pitch. In addition, be aware that Crowdcube is an investment site and investments of this nature carry risks – as in, by participating, you could lose your money. See the site for details.