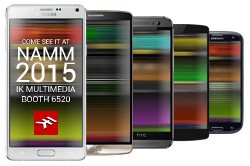 IK Multimedia has announced that it plans to showcase low-latency Android music solutions at the 2015 NAMM Show.

IK Multimedia says that they will ‘present a universal solution that provides near zero latency and real-time audio processing’ on a wide assortment of Android devices (running Android 4.0 or higher and compatible with USB host mode/OTG mode) at NAMM 2015.

Despite representing over 80% market share of mobile devices in circulation, Android has not established itself as a reliable music creation platform.

IK attributes this to three things:

They plan on addressing these issues by creating a low-latency audio system and sharing it with manufacturers:

IK Multimedia has solved this problem with a paradigm shift of a universal solution that delivers astonishing near zero latency performance (down to 2 ms round-trip total latency) on every Android device running Android 4.0 or higher and that supports USB host mode/OTG mode independently from the device manufacturer.

This solution will be made available to the hundreds of millions of devices in circulation from manufacturers like Samsung, Google, Motorola, LG, HTC, Xiaomi and more. Finally, the capability for using the Android platform for serious music making and performance has arrived.

There are a couple of other issues that have challenged developers for the Android platform: higher touchscreen latency and lower profits on the platform.

IK’s biggest challenge will probably be driving enough adoption, on a fragmented platform, to make their software a de facto standard. Interestingly, Android’s fragmentation is an issue that they say that their solution will address.

We expect to have more information from IK at the NAMM Show, later this month.