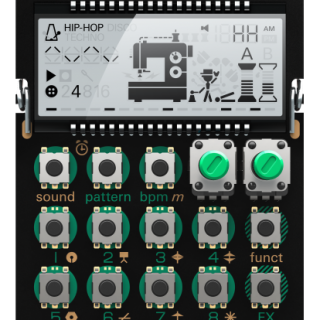 2015 NAMM Show: Teenage Engineering and Cheap Monday have launched a line of ‘pocket operators’ – micro synthesizers that fit in your pocket and a line of matching gear.

These were first seen a session at Moogfest 2014 in Asheville, NC. Here’s a Moogfest image, via photographer Robert Pluma, that offers perspective on the new devices size: 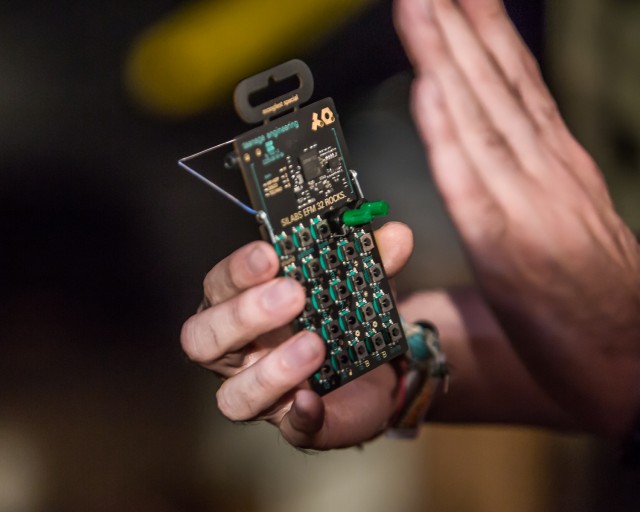 Here’s a preview of the Teenage Engineering PO-12 drum machine, via Cuckoo:

All three models come without casing, with the components and artwork are visible directly on the printed circuit board.

The 2xaaa battery-powered pocket also come with a segment lcd screen, built in speaker, alarm clock and a stand made from bent wire.

All models also feature parameter locks, as well as synchronization functionality and they all have 3.5mm line in and line out.

Each model has its own set of effects, such as filters, bit-crushing, delay, stutter and many more. They are priced at $59 each.

Here’s what they have to say about the origin of the Pocket Operator line:

The idea of the collaboration between teenage engineering and cheap monday was born in the autumn of 2013. the engineers needed new, protective, lab coats for the staff and instead of buying generic ones teenage engineering’s creative director, jesper kouthoofd, turned to his longtime friend ann-sofie back asking cheap monday to design a unique coat and additional garments for his team.

heap monday took on the challenge but asked for a return favour; what began with the engineers need for new lab wear grew into a project where a line of portable synthesizers and matching gear were born in a unique collaboration between the two brands.