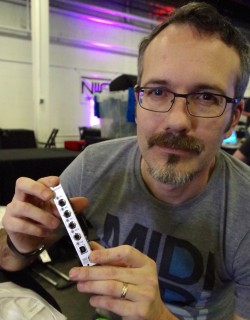 At the 2015 Denver Synth Meet, Chris Randall of Audio Damage, right, introduced the Odio – a 2-in 2-out USB audio interface that runs at modular audio levels (10v p-p).

Odio was originally designed to make it easy to use with iOS devices with your modular – for recording, running insert effects or instruments.

Odio is a class-compliant USB audio interface, though, so it can be also be used with any Linux, Mac or Windows computer to integrate VST plug-in effects as inserts in your modular.

It also offers DC-coupled outputs, so it can also be used as an output pair for apps like Silent Way or Volta. 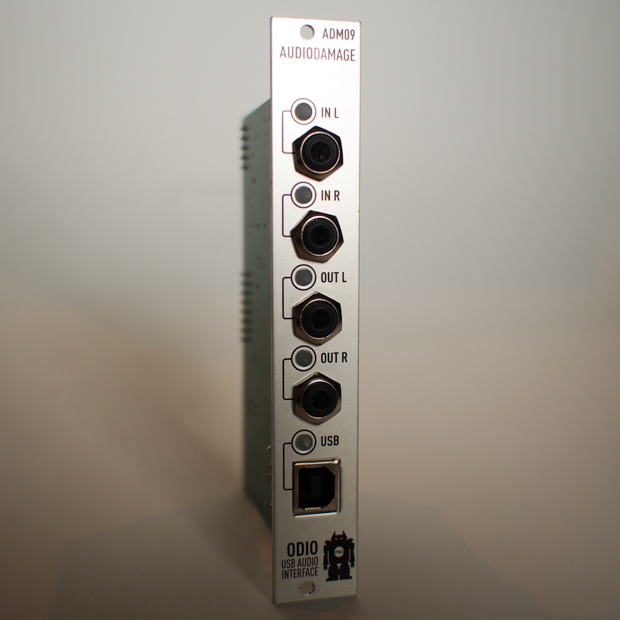 Randall shared that the Odio was actually designed before their many other Eurorack modules:

This is actually our first Euro design, which we announced several years ago. We decided not to make it (simply put: the market wasn’t ready for it yet. Digital stuff in Euro was still a new concept, and the iPad was brand new.)

So we gave the design to Paul Schreiber, which he announced as the E610. Again, it was still too early, so he decided not to make it. But Paul refined the design a bit in the process.

A couple months ago, I asked Paul if we could have the design back, and another round of refinements, and here we are. The time is finally right for something like this.