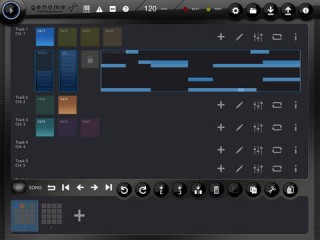 Genome 2.0 features a number of improvements to all areas. Here’s what they have to say about the update:

Genome 2.0 features a number of improvements to all areas. The new song mode makes it easier to work on longer songs and is more intuitive. We’ve also added a metronome, a zoom to fit button, and made it possible to view velocity values on selected notes.

We’ve also redone the file manager to make it easier to manage your files and open them in other apps.

Finally, we’ve added the Rack Page, which will allow you to make songs within Genome using built in modules. To start with, we’ve included a synthesizer, a drum machine and a host of effects. Additional modules will be added over time.

Genome MIDI Sequencer is available in the App Store for US $7.99. See the White Noise Audio site for details on the update.