Donnelly wanted a custom DJ booth, with plenty of storage for a large LP collection – so he built it, using a collection of cheap stuff from IKEA (Kallax + Capita + Lack). This video captures the highlights of his build – and also some mistakes he made along the way that you’ll want to avoid! 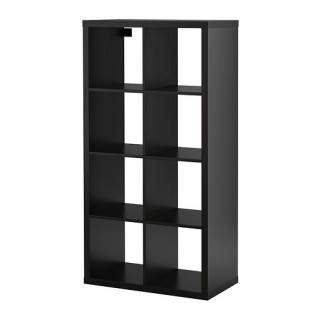 Let’s start with the Kallax. The Kallax is the base of the desk. You can use one if you like or two if you desire a deeper desk with more storage space for records.

Two pairs of Capitas for mounting the shelves. You’ll need two small square shelves for speakers and one long shelf for laptops and controllers.

Despite the daunting instructional guide the Kallax was quite simple to assemble and it took about 15 mins. Here is a complete Kallax in all of its glory.

Find a good spot to mount the Capita and drill a hole in the Kallax top big enough for the bolt to screw through like you see here. Let’s move on. (I had a small hand held vaccuum available to clean up dust from the particle board.)

Next we’ll attach the Capita to the Kallax to get a feel for how we want it positioned. I would not recommend twisting it on like I did here in the video as it will scratch the surface of the Kallax. What you should do is screw the bolt in to the Capita from the bottom with a wrench. As you can see it’s quite sturdy. You could have the angle facing in or out. Up to you.

Measure where you placed the first hole and follow the same steps on the other end of the Kallax. You could place a piece of paper or thin cardboard down before attaching the Capita to prevent it from scratching the Kallax surface. I’ve made some mistakes as this was my first build and I managed to scratch the surface a little. I pretty much went at this guerrilla style so please feel free to do what you think is best.

Now let’s move to the first of three shelves. The long shelf is for your laptop and controllers. Place the long shelf on the Capitas while they are mounted to the Kallax and use the sharpy to draw in guides for your screw holes on the underside of the long shelf. Now remove your Capitas and line them up. Use a small drill bit and drill small holes at the guide points so you can easily screw your smalls screws in. Do the same for the other Capita and connect the top shelf to the Kallax by lining up the Capitas to the bolts and twist the bolts in from the underside of the Kallax top.

Let’s move on to the small speaker shelves. Drill a hole in through the top long laptop shelf like we did with the Kallax. We will use large bolts to connect the small shelves to the long shelf with the second pair of Capitas.

The bolts are not long enough in this case as the top shelves don’t really match the rest of the desk and they are a bit thicker so I went to the hardware store to pick get longer bolts. I used the big plastic washer from the Capita bolts for support as you see here.

You can download the songs from this video via Donnelly’s DJ Puzzle site (.zip).

If you’ve done your own custom build using IKEA stuff, let us know in the comments!