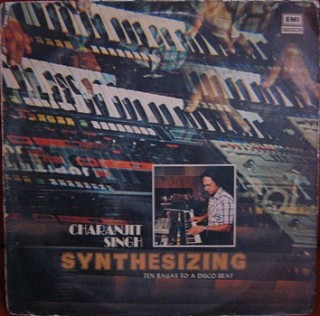 Charanjit Singh – a Indian musician and performer, best known for his pioneering electronic album Synthesizing: Ten Ragas To A Disco Beat – died yesterday. He was 74.

Singh performed extensively as a soundtrack session musician, on guitar, violin and synthesizer. He was also active as a solo artist and released several albums of covers of popular songs and film soundtracks.

He was best known in the West, though, for his 1982 album Synthesizing: Ten Ragas To A Disco Beat.

The album is one of the first recordings to make heavy use of the Roland TB-303 & Roland TR-808 combination. Singh’s early use of the 303 + 808 combination has led some to call him the ‘inventor of acid house’.

The only thing that Singh’s Synthesizing has in common with acid house, though, is instrumentation. The key element of acid house – a squelchy 303 bass sound that is tweaked constantly throughout the track – is completely absent on Synthesizing. And, where acid house explores a minimal, mechanical aesthetic, the focus of Ten Ragas To A Disco Beat is on Singh’s melodic keyboard solos.

What makes Synthesizing: Ten Ragas To A Disco Beat notable is that it’s not acid house. Singh took the now-classic 303/808 combination and came up with something completely different. He may have used the same instruments that were later used by the Chicago acid house pioneers, but he brought a different set of skills and a different musical culture, and came up with something unique, as a result.

Synthesizing, like the 303 and 808, had limited appeal when it was initially released. It was rediscovered 20 years after its release, though, and became a cult favorite among electronic music fans. It was reissued in 2010, and Singh toured, in the last few years of his life, performing his classic work.