Archetype is a collection of eight virtual instruments (Beatdown, Sickness, Evilfish, Hatchet, Clone, Pulsator, Whoosh Machine and Rogue-One) which run the gamut of vintage and modern instruments, which are manipulated and controlled with Archetype’s controls and interfaces. 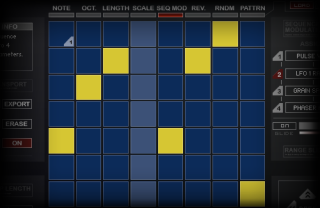 Adapted from Sonic Faction’s Ableton Push sequencer, Archetype brings the 8-by-8 grid experience to Kontakt. Each instrument (except Whoosh) has its own sequencer built in, allowing the user to create note patterns on the fly, selecting scales, sequence modulation, pattern save and recall, and so on.

The Archetype bundle includes some of the most sought-after synthesizers and drum machines in the world, each instrument meticulously sampled from the original hardware and redesigned “with a fresh new look.”

With over 800 presets included, Archetype is capable of a vast range of musical styles, allowing for producers, composers and sound designers to have an analog arsenal at their fingertips wherever they go. Each instrument’s unique interface is designed with a modern twist and has reactive animations that, developers say, “will inspire your creativity.”

Archetype is powered by the (free) Native Instruments Kontakt 5 Player and now fully supports NKS Native Kontrol Standard (which is coming out next week, October 27). Owners of Komplete Kontrol S-Series keyboards and Maschine 2 are able to use the hardware to browse all Archetype sounds at once, and easily access device controls for a greater degree of integration.

Pricing and Availability. Sonic Faction’s Archetype is available now for $199 US. To purchase, or for more information, visit the Sonic Faction website.