At the 2016 NAMM Show, Dave Smith Instruments has announced the OB-6, a new 6-voice synthesizer, with all-analog signal path and discrete VCOs and filters, developed in collaboration with Tom Oberheim.

Boasting a sound engine inspired by Oberheim’s original SEM (the core of his acclaimed 4-voice and 8-voice synthesizers), the new instrument is designed to provide true, vintage SEM tone with the stability and flexibility of modern technology. 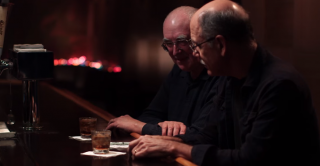 “Tom and I have been friends and friendly competitors since the late 1970’s. Back in the day, people were typically in either the Prophet or the Oberheim camp,” says Smith. “Now, with the Prophet-6 out and doing so well, we thought it would be fun to combine our strengths and bring back Tom’s classic polyphonic sound, too — in a modern format.”

Adds Tom Oberheim: “A lot of people, myself included, have always felt that the SEMs had a certain uniquely big, organic sound unlike anything else. Working with Dave to make that sound widely available again with some modern touches and full programmability has been real a pleasure.”

The OB-6 features two discrete voltage-controlled oscillators (plus sub-oscillator) per voice, with continuously variable waveshapes (sawtooth and variable-width pulse, with triangle on oscillator 2). There is a classic SEM-inspired state-variable filter (low-pass, high-pass, band-pass, and notch) per voice. Voltage-controlled amplifiers complete the all-analog signal path. “The classic, bold SEM sound is all there,” said Oberheim.

Present also is X-Mod, with filter envelope and oscillator 2 as modulation sources (with bi-polar control). Destinations include oscillator 1 frequency, oscillator 1 shape, oscillator 1 pulse width, filter cutoff, and filter mode. The knob-per-function front panel puts virtually all parameters at a user’s fingertips. Toggling on the Manual switch enables live panel mode, in which the OB-6 switches to the current settings of its knobs and switches.

A dual effects section provides studio-quality reverbs, delays (including standard and BBD), chorus, and faithful recreations of Tom Oberheim’s acclaimed phase shifter and ring modulator. The effects are digital, with 24-bit, 48 kHz resolution, but a true bypass maintains a full analog signal path. Additionally, the OB-6 features a multimode arpeggiator and a polyphonic step sequencer with up to 64 steps (and up to 6 notes per step) plus rests. It allows polyphonic keyboard input and can sync to external MIDI clock.

The full-size, four-octave, semi-weighted keyboard is velocity and aftertouch sensitive. Said Dave Smith, “As with the Prophet-6, we made size a primary concern on the OB-6. It’s the right mix of power and portability and it fits right in on-stage or in the studio.” Added Oberheim, “And of course, it’s got that unmistakable SEM sound that’s going to turn a lot of heads. ”

The OB-6 is manufactured and sold by Dave Smith Instruments. It will be available in March, with a US MAP of $2,999. See DSI’s site for details.