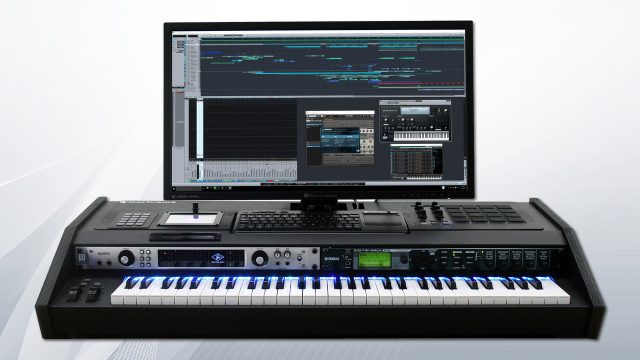 “The mandate for this goal,” adds Wong, “was for Kami to be the last keyboard production station or computer you will ever need to purchase for music production for the rest of your life…and possibly your children’s.”

Kami can be equipped with dual Xeon 12-core processors, for up to 24-cores running a Windows 10 (64-bit) operating system. Kami is also able to fully use up to 512GB of RAM. And 4 hard drive storage bays are available that can be outfitted with SSD or SSHD hard drives, for up to 14TB of storage.

Kami is available in 61 or 88 semi-weighted key versions. The X/Y pad can be used in 3 different modes including: as a KAOS pad, as a note trigger and as a drum trigger.

A unique feature is the interactive LED button pad that lets you program each of the 15 buttons with a unique image that can then be used as a hotkey, app launcher, to send out a string command, as a macro, to control your multi-media or even as a reminder.
Unlimited preset banks can be created and saved.

16 velocity-sensitive drum pads and 6 mappable knobs round out the Kami’s controls.

A removable wireless computer keyboard with trackpad is also included.