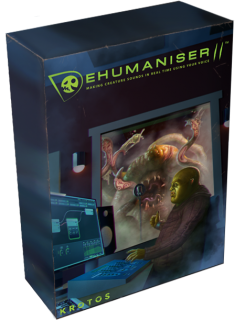 Krotos has released Dehumaniser II, a new generation of their vocal-processing software for making creature and monster sounds in real-time.

This new version enhances audio capabilities of Dehumaniser with additional models, processes and the ability to use the program within your DAW as a VST, AAX, and AU plugin.

The versatile effects section of Dehumaniser II has been expanded to include processing modules such as Flanger Chorus and Ring Modulator. More than 100 presets have also been built-in for quick setups and to inspire sound design. These presets are tailored for monsters, dialogue, robots and experimental effects.

Dehumaniser 2 can also be used for music, ambiences, percussion and more as a creative sound design tool.

The sound library has also been vastly expanded, now including a range of more than 100 high-quality animal recordings. The sounds have the capability of being triggered and manipulated via amplitude, pitch or a range of audio descriptors, and were recorded at 192khz, 24-bit. Existing sound libraries are able to be imported, and additional libraries can be purchased from Krotos’ website.

Dehumaniser II is available for £449. Upgrade pricing and a free demo version are also available.