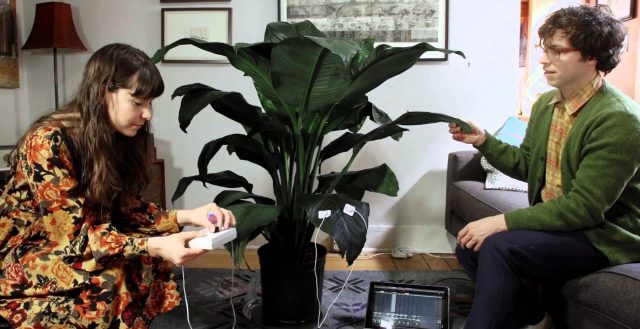 The arts collective Data Garden has announced that they have 60 of their MIDI Sprout devices, MIDI interfaces for plant biodata sonification, that they will make available on May 22nd, 2016.

The MIDI Sprout was originally produced via a Kickstarter project.

Here’s how the MIDI Sprout works:

Each MIDI Sprout comes with two probes that measure small electrical currents across the surface of a plant’s leaf. When applied to a human this is called the galvanic skin response (GSR). GSR readings provide insight into humans’ inner emotional states and are the basis of simple lie detector circuits.

The MIDI Sprout converts these fluctuations into MIDI notes and controls that can be read by synthesizers and computers. This information can be scaled and played through synthesizers or used to activate pre-programmed sonic environments.

Here’s a demo of the MIDI Sprout in action:

If you’re interested in the MIDI Sprout, you can sign up for email updates on the release via the project site.