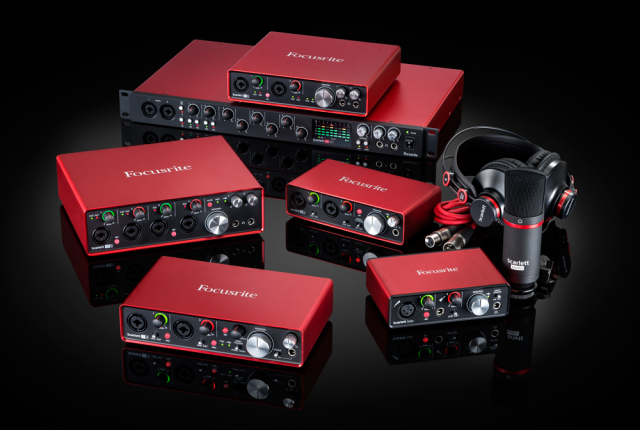 The next-gen Scarlett series includes six interfaces, as well as two “studio pack bundles,” ranging from the two-in, two-out, single mic preamp Scarlett Solo up to the rack-mounted 18 in / 20 out Scarlett 18i20. Interface improvements include new metal gain controls and more sleek red metal chassis. The latest Scarlett mic preamp now features a more even gain structure, and the instrument input has been completely redesigned with increased headroom for handling “even seriously hot” guitar pick-ups.

Focusrite have provided analog protection circuitry across both the inputs and the outputs, guarding the interfaces against unwanted power surges. The Scarlett range also now operates at sample rates up to 192kHz.

Availability. The bus-powered range of Scarlett 2nd generation interfaces is available immediately, with the Scarlett 6i6, 18i8 and 18i20 following later in June. The Scarlett range is Mac and PC compatible, working across all major DAWs.