Nonlinear Labs has announced that the C15 – a new high-end keyboard synthesizer – is now available to pre-order.

Nonlinear Labs is a new company, founded by Native Instruments founder Stephan Schmitt. The company was founded with the goal of making advanced electronic instruments for performing musicians, focusing on playability, expressiveness, quality, and durability.

The C15 is a polyphonic instrument with a digital sound synthesis architecture. The goal of the audio engine is not to model analog machines of the past or to play back samples or complex waveforms, but to focus on creating sounds that can be dramatically influenced by how you play. 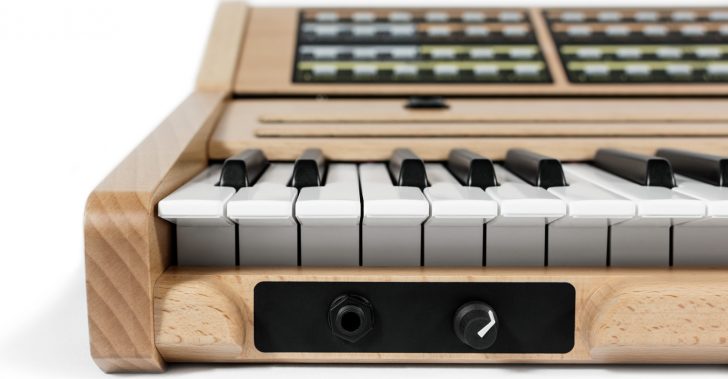 The signal processing structure has been condensed down to an essential, yet powerful arrangement of carefully chosen components. The only signal sources are two sine wave oscillators. They are connected to each other and to a feedback bus for phase modulation and their signals are processed by two wave-shapers, a comb filter, a multi-mode filter, and a chain of five stereo effects.

The signals are generated in real-time by digital algorithms. The core components are two sine wave oscillators feeding a structure with phase modulation (often referred to as FM), waveshapers, a delay-based resonator, a multi-mode filter, and a chain of five effects. Feedback signal paths also play an important role in the sound character and responsiveness. Together, these elements generate organic and complex sounds with a natural instrument behavior.

The C15’s human interface has been designed for two purposes: playing and sound design. The instrument features a Fatar keybed with semi-weighted long-arm keys. There is a specially-designed ergonomic pitch bender, two very long touch strips (ribbons), and connections for up to four pedals.

The instrument itself is made primarily from wood, steel and aluminum.

Every parameter can be directly selected by a button. The C15’s functions are software-defined, but have a dedicated haptic control surface. In addition, a graphical user interface can be displayed and edited on any device that has a browser and Wi-Fi. The interface is optimized for touch screens and can be intuitively zoomed and panned with common gestures.

See the Nonlinear Labs site for a large collection of video and audio demos.