Dark Net is a documentary series that explores the furthest reaches of the internet. Melland shared a video, embedded below, that documents of his process for scoring a cue for the Season 2 series finale: 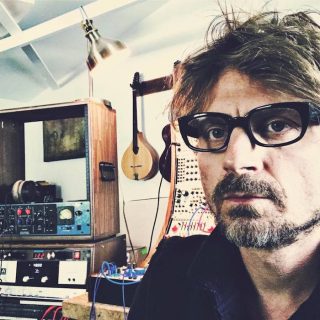 We asked Melland, right, to tell us more about the process of scoring a show like Dark Net, and the story behind making this particular cue for the score:

Synthtopia: What can you tell us about this episode of Dark Net?

Justin Melland: This episode is about a new technology that is being developed that can mimic the texting habits of the mind of a unique person. Essentially you can load in all the digital conversations that a person has done, and the algorithm can then improvise future conversations and responses based on that information.

It’s specifically about some programmers who use it for a very strange purpose. I can’t go into more detail because the show still has to air, but I can say that this is a very interesting episode. The season Finale is on May 25. The show airs on Showtime Thursday evenings at 10PM.

Synthtopia: Can you share any details behind the scene that this cue is for? Did you get direction in terms of what was wanted for the scene musically?

Justin Melland: In this scene, we outline the main problem the characters have, which is a big loss.

Then we follow them through the way they deal with the loss, and ultimately, the strange idea that comes out of this. The big shift in momentum in the middle of the cue also follows a very important turning point in the story.

When we score Dark Net now, because I have worked so closely with the producers over the years, I get a lot of freedom to design my own pallet, because they can trust that I put razor-like attention on every detail the music needs to address.

What I do get from them is some temp music and I have a conversation with the show producers about whether or not the temp is in the right emotional ballpark. I always check in and ask “Is this hitting in the right way for you? Is there anything you wish the score could do for you here that it is not right now?”

Then what I do after that, is extract any accurate emotional information from the temp music, and bring that sense with me into my own pallet that I’ve designed for the series. Then I meticulously go through the scene, making sure to hit every important cut and nuance.

The key to scoring a scene properly is to nail both the emotional quality of the music, and to properly support the edit, through momentum shifts and properly placed timbral variations.

Synthtopia: How much time do you have to score an episode? 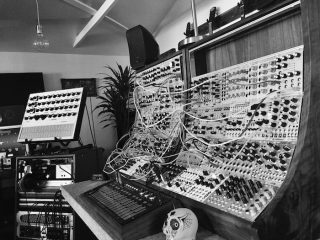 Synthtopia: How did you decide what instruments and techniques to use on a score?

Justin Melland: When you are a film composer, your instrument really ends up being your entire studio. If you can think of the entire collection as one huge instrument, with many variations of tone and expressivity, I think you’ll get close to the mindset of a film composer.

That’s why I love to fill my studio (right) with instruments that inspire me.

So, the first part of the process of building a “instrument” like this is to choose all the things you need, building them up over the years, and making sure to get extremely intimate with them. This happens naturally, in a way, because a busy film composer hardly ever stops writing! I often write over 10 hours of music a year!

So, during this period I ferociously devour all the aspects of my new and old instruments and assimilate them into my composer mind. Then we get to a really cool part of the process! After that is done, then I can look at a scene, get really quiet in my head, and all of a sudden I’ll start getting ideas about which one of my instruments I should use for a cue.

In short, I load up my head with stuff, so that I can use intuition and improvisation to help me decide what to do. That’s one reason why I just love having a bunch of great keyboards and a large Eurorack setup, with lots of different colors in it. Options are key!

I also love the way different synths make me think differently to create a sound. It all goes into the process.

Once you get your pallet decided on, the next part of the thinking has to be in the “tempo” area. I turn off all music and take in the rhythm of the edit. Then I reference the temp cue to see if that tempo was right, and then I pick a perfect tempo based on a hybridization of those two pieces of information.

It’s really important to address the tempo of the temp, if the producers and editors like it, and feel like it is working. That means there is something really cool they achieved with the edit that I need to preserve when writing the original music.

The next parts of the process are theme, harmony, and whether or not there will be a melody. This is all very much subject to the character on the screen. Every character will have a perfect harmony. Even if it’s aleatoric noise. You just have to find it. Once you do, you are on the road to magic! Then I decide whether or not there will be a thematic or melodic reference in the piece.

Synthtopia: Can you tell us about the process for this particular cue?

Justin Melland:  In the beginning of this cue, the characters are experiencing a tremendous loss. They are devastated. So, their pain is represented by the Guitarviol. It’s blown out with lots of reverb, this helps illustrated how they are lost in a world of memories.

It’s also laying inside of an electronic texture that I made on the modular, which helps to keep us within their world. They are computer programming geniuses, and the story is about creating “life” with an algorithm.

As we shift in the cue, it takes on a new quality. The human element goes away, and the lead arp is played on the Prophet 6. The line is still dark, but now it has a strange form of hope, that most of us will know NOT to trust. The digital side of life is taking over in this scene, and having the cue take this electronic turn really helps seal it.

Keeping it emotional makes us feel the human desperation behind this digital choice.

Synthtopia: How can people find out more about you and your work?

Justin Melland:  I just finished a wide ranging album of electronic music that I have on Bandcamp called Weird Planet.

You can listen to a few cues from Dark Net Season 2 below: