The three-day event, organized by Ableton, is designed for musicians and producers that are interested in using cutting edge technologies, and is not limited to specific types of music or music technologies.  Ableton describes the event as ‘a collective exploration of what it is to make music today and what it could be tomorrow.’

Ableton is best known for Live, its flagship software for music creation and performance. But while Loop is organized by Ableton, the focus is not on Live, but rather on the types of technologies that electronic musicians and producers are interested in, and the types of musical performances they might find inspiring. 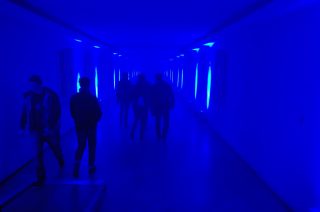 Loop is in its third year, and has grown to host about 2,000 participants. The event’s offerings have grown with the attendance numbers, too, so there were consistently multiple options for attendees, throughout the day and night, including presentations, discussions, performances, installations, and smaller group workshops and studio sessions.

Loop is intended for an international audience, and all signage and events are presented in English.

Synthtopia attended Loop as media. The smaller workshops and studio sessions were limited to standard attendees, so our discussion focuses on Loop events open to all attendees.

Ableton films all the main presentations at Loop. We’ll feature some of these presentations, as official video becomes available.

Location: The Funkhaus In Berlin

Loop was held, for the second time, at The Funkhaus in Berlin.

The Funkhaus, in addition to having a great name, is a utterly unique venue. It was built originally in the German Democratic Republic days as the national recording studio for public radio and TV. As a result, The Funkhaus has fascinating Mid-Century Modern architecture, and lots of spaces that were designed to be acoustically useful.

The Funkhaus fell into disuse, with the fall of the Berlin Wall and the reunification of Germany after 1989, because its facilities were no longer needed. But in recent years, the venue has found new life as an event space.

The age of The Funkhaus brings with it some liabilities. The building can be drafty and cool, and it doesn’t have some of the features and accessibility that more modern spaces might offer. Nevertheless, we hope that Loop can continue to grow at The Funkhaus, because it’s such a unique venue, and it seems quintessentially ‘Berlin’.

Berlin is easy to navigate for international travelers.

We flew into Berlin Tegel airport, and picked up a transit pass (aka the ‘Berlin WelcomeCard’) there. Once you’ve got a transit pass, you can get around easily via public transportation, using directions from mobile mapping apps.

Language should not pose much of a barrier for English speakers. Berlin is an international hub, and most people you encounter speak English fluently. Hotels and restaurants are generally very affordable, too, making Berlin a relatively inexpensive destination.

There were more than a dozen performances, spread throughout The Funkhaus. We could not attend them all – but each of the performances we could attend was musically and visually excellent.

One of the musical highlights of Loop 2017 was the solo performance of guitarist Kaki King (above), The Neck is a Bridge to the Body.

King plays a unique acoustic guitar that’s designed to display visuals that go along with the music. King processes the guitar with electronic effects, and triggers other sounds and visual effects as she plays. The result is a psychedelic synthesis of technique and technology. King discusses some of the technology behind the show at her site.

Here’s King’s preview video for The Neck is a Bridge to the Body:

Another musical highlight of Loop 2017 was a panel discussion and performance by The Nile Project:

The Nile Project brings together artists from the 11 countries through which the Nile River flows.

While not explicitly political, the group makes an implicit case for people to look beyond their national boundaries and rivalries, featuring fantastic musicianship that transcends borders and the vibrant colors of traditional clothing of many cultures.

The Nile Project performance started with a discussion with Mina Girgis, founder of The Nile Project, and musicians Kasiva Mutua and Michael Bazibu. This was followed by a tight, polyrhythmic performance that grooved hard as it took the audience on a musical and visual tour of 11 countries.

Composer William Basinski, above, gave an electronic performance that was both austere and enveloping.

Basinski’s works often make use of drones and loops. His performance at Loop was based around a small modular system and explored processing repetitions of loops to create pieces that slowly build, evolve over and transform over the length of the work.

The quiet beginning of his performance may have lulled some into thinking it was ambient music, but Basinski methodically built the intensity of his music to completely absorb the audience in sound. 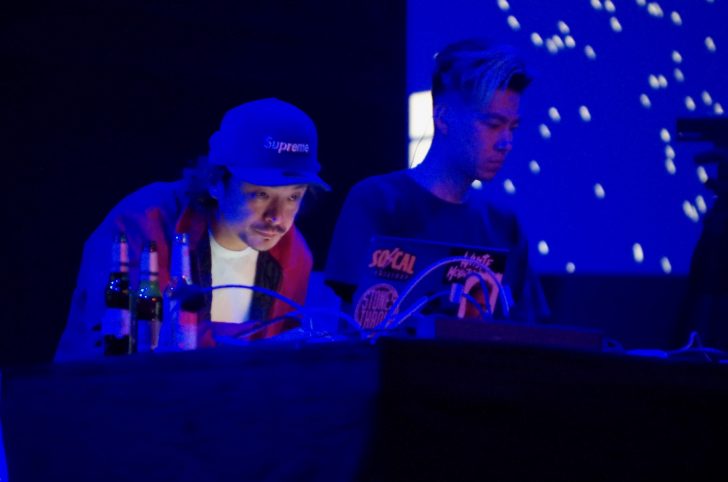 Nosaj Thing and Daito Manabe, above, closed Loop 2017 with their No Reality Live performance.

The duo’s performance was one of the most conventionally laptop-centered performance of this year’s Loop.  But their set also offered a constantly changing stream of electronic beats and sound. And they used 3D scanning and modeling to create visuals that sent their digitized doppelgängers soaring through space, exploding into particles and flying through imaginary landscapes.

Installations and Interactive Works at Loop 2017

In addition to the musical performances, Loop organizers filled The Funkhaus with a wide-ranging collection of sound installations and interactive works.

Each of the main hallways and open spaces were transformed with light and sound, so that as you left one event for another, you’d transition by walking through a multimedia piece.

In addition to the works in these transition spaces, there were also installations that were designed to be destinations, encompassing huge rooms; intimate sound installations, designed for one or two people; and pieces that required interaction.

One of the many multimedia works spread out across the Funkhaus was ‘TouchMe’, an installation that used human touch to trigger audio events:

At the other end of the spectrum, Kaffe Matthews’ Sonic Bed is a big, comfortable bed that hides a 12-channel speaker system that plays ambient sounds that can only be fully appreciated from inside the bed:

Throughout the three days of Loop, there was a busy schedule of presentations, discussions, workshops and studio sessions, starting at 10:30 am and continuing through 7pm. At any given time, there were usually four scheduled options to choose among in the Funkhaus’s larger rooms. In addition, Loop attendees registered in advance for a wide range of small group Studio Sessions, Listening Sessions and workshops scheduled throughout each day, led by industry leaders.

The bounty of options available was a little overwhelming at times, because we continually had to choose among lots of interesting options. Loop organizers had professional videographers at all the events in the large session rooms, though, so we are hopeful they will share some of the sessions online.

Here are a few examples of the types of sessions that were available:

He was joined by journalist Peter Kirn (CDM) in a discussion that included demonstrations of how he approaches sound design, Prève’s thoughts on challenging oneself as a sound designer, and tackling sound design challenges.

His presentation delved into many of the most common techniques of generative music, and featured interactive Javascript visualizations for works by artists like Steve Reich, Terry Riley and Brian Eno.

Interested readers can read about these projects in his article JavaScript Systems Music at other posts at his site.

Audio/visual artist and Cycling ’74 specialist Tom Hall gave a presentation that was mind-blowing on a lot of levels. He dug into coding with Gen, a system within Max that lets you create high-performance code for audio and visuals, that can’t be efficiently created with ordinary Max/MSP/Jitter objects. 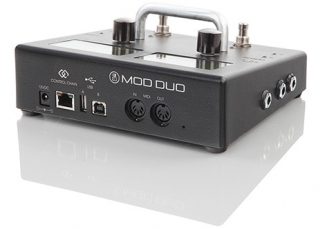 Together, they demonstrated how you could use Gen to create audio effects applications that could be loaded onto the Mod Duo pedal, so you can essentially create your own hardware audio effects system.

The most mind-blowing part of the presentation, though, may have been the fact that the Funkhaus’s Studio 2 was standing room only, for a session on coding custom audio apps.

If even a fraction of the attendees end up coding something in Gen, it could result in hundreds of new developers creating all sorts of new audio apps. 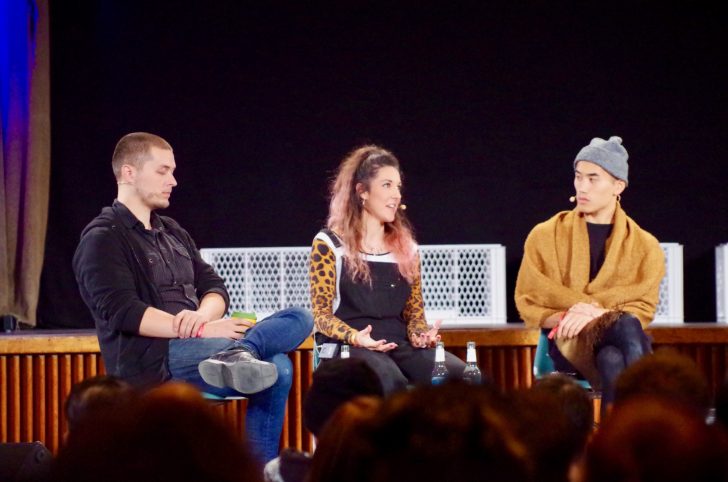 One of the most entertaining sessions of Loop 2017 was the closing panel discussion, The Screen Is Your Stage: Making Music for Online Audiences.

The discussion, moderated by Loop Creative Producer Ed Williams. Each of the panel members had a chance to share and analyze their own videos. While the discussion was often hilarious, it was also a great opportunity to learn the approaches of three successful YouTube musicians.

In addition to all the scheduled events, Loop organizers worked with a variety industry partners to create several rooms where attendees could try out new music technologies.

The organizers seemed to have been selective about who they partnered with for Loop 2017, because the vendor areas were always packed with people:

One of the cooler partnerships for Loop 2017 was with Dolby Labs, who set up a Dolby Atmos Studio at the Funkhaus: 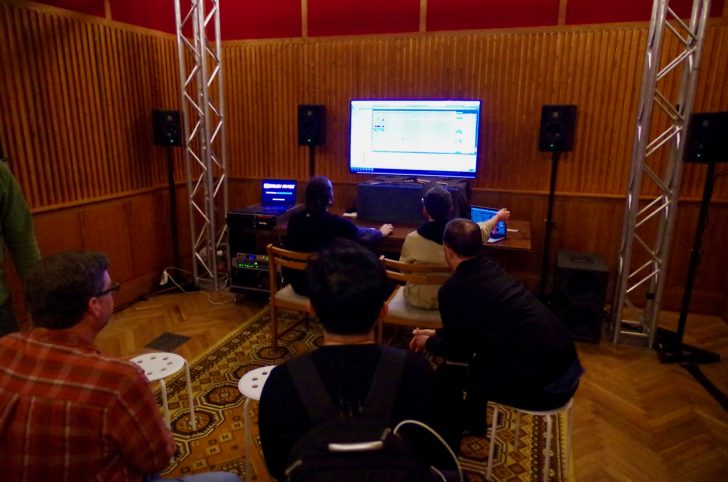 Atmos is based on the idea of abstracting mix positioning, so that you position audio objects in a virtual 3D space and then that object-based panning can be rendered for various types of sound systems.

This is technology that most attendees probably had never worked with. So the Atmos Studio offered a great opportunity for attendees to see and hear how some cutting-edge audio technology works. 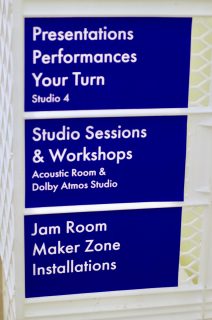 There were lots of other things to do at Loop, including:

As a result, it’s likely that everyone that attended Loop 2017 had very different experiences than we had, and participated in different sessions.

Talking with other attendees, though, it was pretty clear that most had great experiences at the event, and came away wishing that they could have done more. 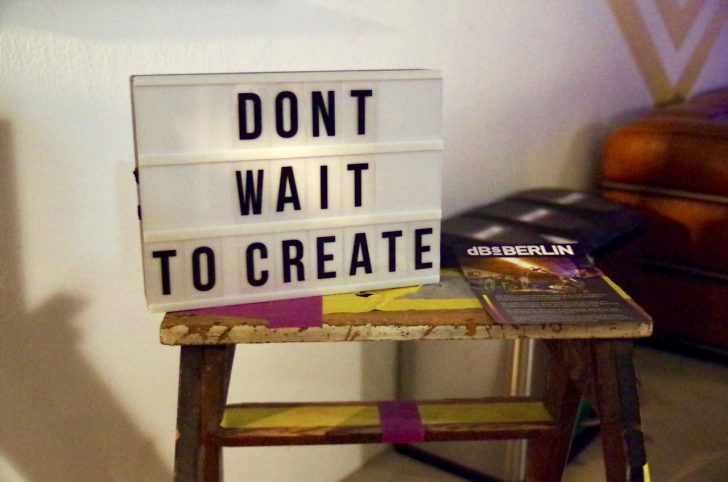 Overall, we think the Loop organizers managed to successfully grow the event significantly from last year, while also improving it.

There were two main areas, though, where there are opportunities to make the event event even better:

Synthtopia attends a lot of electronic music-related events, and each one has a unique “flavor” and focus. NAMM focuses primarily on the commerce of music gear. And Superbooth and Knobcon focus on the technology of synthesis.

Loop is a Mecca for electronic musicians and music producers – an annual pilgrimage for some and a once-in-a-lifetime experience for others. If you’re an active (or aspiring) electronic musician or producer, we recommend making the trip at least once.