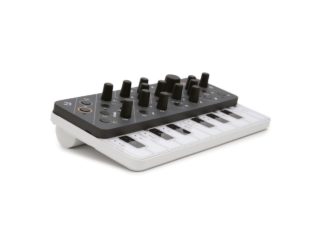 The first in what they are calling a “new family of highly portable electronic musical instruments,” SKULPT follows on Modal Electronics’ CRAFTsynth, 001 and 002 Digital / Analogue hybrid synthesizers, 008 Polyphonic Analogue synthesizer, and the CRAFTrhythm drum sampler. Based on the innovative voice architecture of the Modal CRAFTsynth, SKULPT boasts four polyphonic voices of synthesis with advanced sound creation features.

Modal SKULPT is highly portable – measuring 10”x5 1/2”x 3” and weighing less than 2lb – with batteries installed. SKULPT can be powered by either 6 x AA batteries, or via USB power.  Modal SKULPT also provides a Class Compliant USB MIDI connection, enabling SKULPT to play in an integrated setup with Mac OSX, Windows or iOS and Android tablets and phones.

In addition the MODALapp editor provides “complete” visual access and control to all of the synth’s features, along with tight integration of Modal’s CRAFTsynth and CRAFTrhythm devices – allowing the user to work across the full range of Modal instruments with a single uniform editing environment on the user’s platform of choice including MacOSX, Windows or iOS and Android.

Modal SKULPT will be available to order via the Kickstarter crowdfunding platform, beginning next Friday, July 13. More details and updates will be forthcoming on the company site. Pricing is yet to be confirmed, but Modal Electronics has said that they expect SKULPT will be less than US$300.