Inhumanity is a grindhouse action film about a woman that becomes entangled in a mystery, involving suspicious deaths, a corporate conspiracy and a psychotic killer.

And it’s the first full-length film scored with an iPad running Korg Gadget.

We talked with composer Tony Longworth about getting the gig to do the soundtrack, how he got the idea to score the film with an iPad and what’s involved in scoring a 2-hour film with an app like Korg Gadget.

Synthtopia: Tony, when we saw your promo video for the Inhumanity soundtrack – and noticed that you did the score on an iPad with Korg Gadget – we had to learn more.

First off, what can you tell us about the film?

Tony Longworth: Well, Inhumanity is an independent movie, written and directed by Joe McReynolds and shot in Austin, TX.

I guess I’d call it an action-noir-thriller, because you can’t really pin it down to just one genre.

The movie centers around a character named Jessa (played by Darcel Danielle), who escapes death at the hands of a notorious serial killer.

The attack leaves her in a coma. Awakening from the coma, she discovers that her father has taken his own life. Unconvinced, Jessa investigates this suspicious suicide and uncovers dark and far reaching conspiracies.

Synthtopia: How did you get involved?

Tony Longworth: I’d worked with actor Ford Austin several times before. Ford plays Sergio in Inhumanity and while shooting the movie, Ford turned director Joe McReynolds on to my work.

Joe really dug what he heard, so we got to talking, I sent a few demos to him and I got the gig of scoring the movie.

Synthtopia: So, where did the idea of scoring the film with an iPad come from? Have you done previous projects this way?

Tony Longworth: This was the first time I’d scored a movie on an iPad and it was just one of those happy coincidences.

I’d just started using Korg Gadget on the iPad when Joe got in touch with me to discuss the Inhumanity soundtrack. At that time I was writing new music using Gadget for my two bands, Flesh-Resonance and Captain Creep, experimenting and seeing what Gadget was capable of.

The Korg Gadget synths just blew me away and Joe was looking for a soundtrack with gritty, dirty synths, so it was one of those lightbulb moments. I knew Gadget would be perfect for the task.

Synthtopia: Why score a film with an iPad? Did you have to sell the filmmakers on the idea?

Tony Longworth: Well, to be honest, it was a pretty easy sell.

I wrote a selection of demos showing off a wide range of Gadget synths – different sounds, different emotions – and Joe was completely on board with it.

We did have a “Can this really all be done on an iPad?” meeting, where we discussed the feasibility of it all,.

But we eventually decided that there was only one way to truly find out and that was by actually doing it.

Synthtopia: So you got the job to score the film – what did the filmmakers ask for, in terms of a score?

Tony Longworth: Joe had a real strong vision for the music very early on.

He envisioned it as a synth-driven, gritty, grindhouse soundtrack, retro yet contemporary.

As the soundtrack started taking shape, I developed different sounds for different characters. I wanted to make it personal to these characters in the movie, and I wanted the audience to feel what was happening on screen through the music.

Joe was there, every step of the way, with guidance and inspiration. He’s a great guy to work with.

Synthtopia: What can you tell me about your setup for creating the Inhumanity score? What type of iPad did you use, what software, what peripherals, etc?

Tony Longworth: My Inhumanity studio consisted of a 3rd generation iPad, Korg Gadget app, Korg microKEY Air keyboard, Sennheiser headphones and my iPhone, that was it for actually writing and mixing the music. 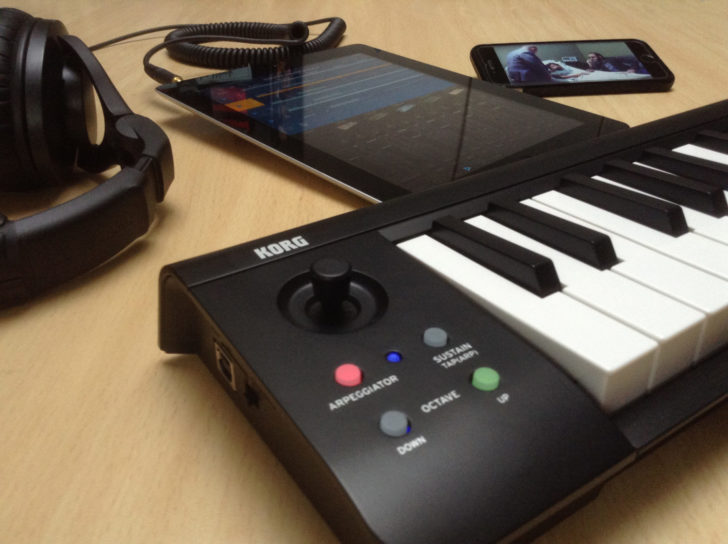 All final pieces of music were then exported and mastered on a PC.

At the beginning of the project I was writing the soundtrack without a MIDI keyboard, I was just using the onscreen Gadget keyboard. Korg heard about the project and kindly sent me the microKEY Air keyboard which made things so much quicker and easier. It’s nice and compact, so it fits perfectly in my backpack when I’m on the road. 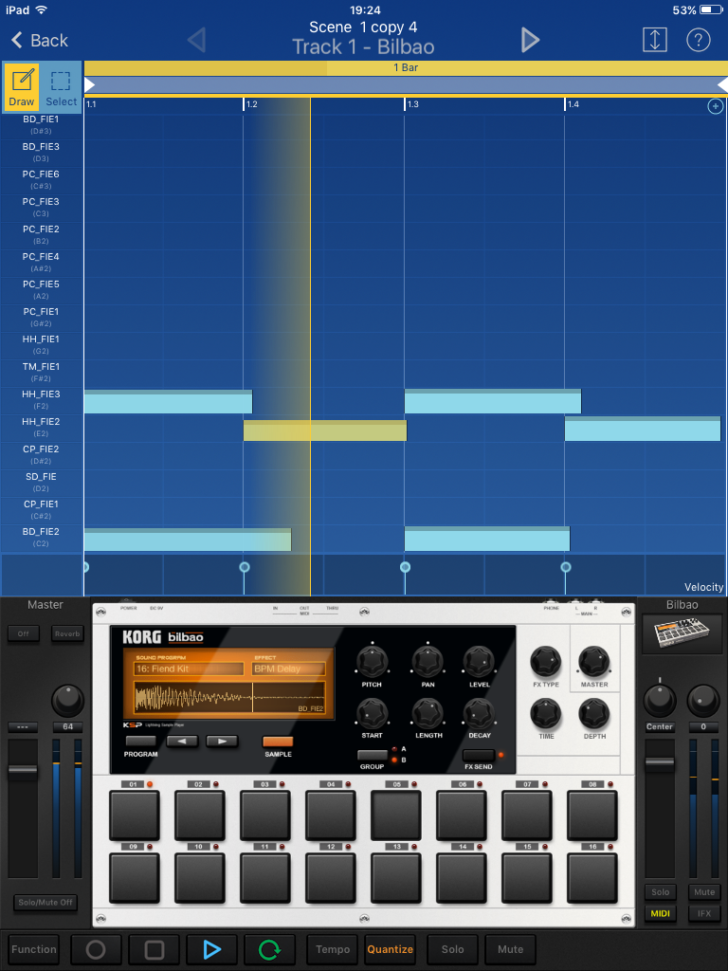 Synthtopia: Are all the instruments heard in the soundtrack coming from Gadget, or are there other traditional or electronic instruments involved?

Tony Longworth: Everything you hear on the soundtrack is coming direct from Gadget, apart from some guitar overlays on the track The Perfect Specimen.

Everything else you hear are Gadget synths straight out of my iPad. 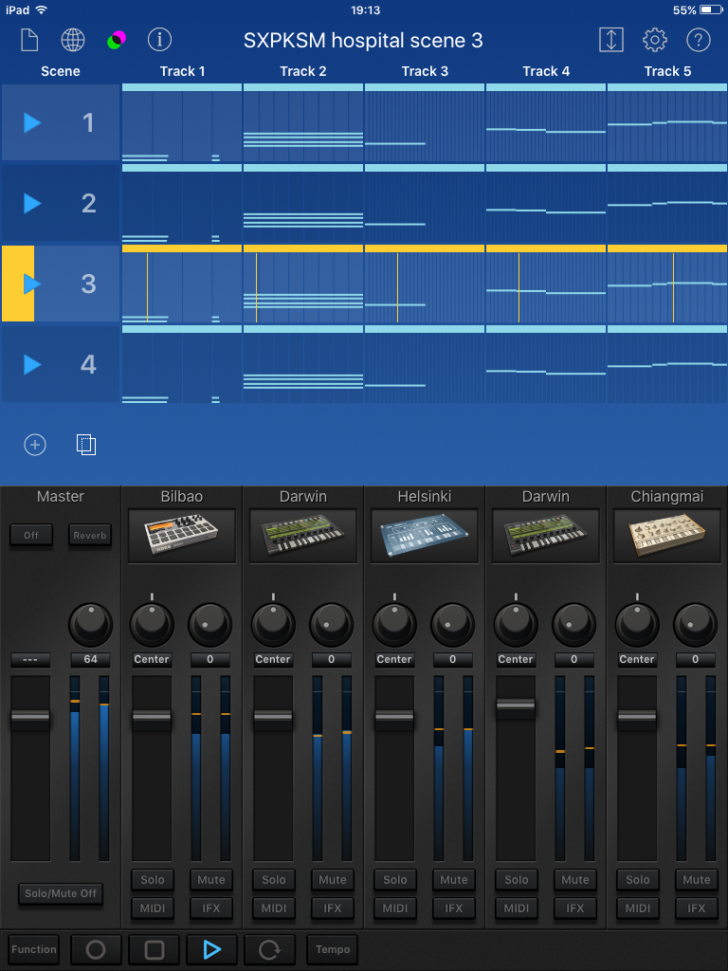 Synthtopia: Most Synthtopia readers have previously seen photos of composers, conducting an orchestra with a film showing on a screen in the background, or scoring a soundtrack to video in their DAW.

What’s that scoring process look like when you’re scoring a film on an iPad?

Tony Longworth: The actual process itself involved the director sending me footage and explaining what he wanted for a particular scene, both in terms of emotion as well as sound.

Joe’s so good at explaining what he wants from a particular scene, we just clicked and we could talk openly, bouncing ideas back and forth, it all really helped with the creative process.

Once I knew what he wanted from a scene, I’d develop sounds and ideas then I’d play the footage looped on my iPhone and just go for it, start recording, see where it took me. Old school, I know, but it really worked well.

I considered syncing the video footage early on in the project but decided to keep the whole setup quick and lean, and doing everything freestyle added to the overall vibe of the soundtrack, in a positive way.

Synthtopia: With an iPad and Gadget as a portable studio, does that affect how and where you work?

Tony Longworth: It’s great, it means I can work anywhere and everywhere. I’m not restricted by time or location.

I have a small area in my home studio where I have this gear ready to be used and anytime I go on my travels, I just quickly pack it up into my backpack and go on my way.

I had my portable studio with me wherever I went when working on Inhumanity, so the soundtrack was written indoors, outdoors, on trains, in cars (not while driving I must add), in hotel rooms and in bed.

I sleep with my iPad next to my bed, so when working on this soundtrack, if I ever woke up with inspiration, I could quickly capture it. There were many times during the scoring of this movie that I’d awake at a ridiculous time with an idea in my head and I’d just grab the iPad before the idea got away from me.

I’ve also got Gadget on my phone, so there were times when I was traveling and I had to record something real quick. Instead of grabbing my iPad out of my bag, I could just grab my phone out my pocket and do it – the joy of cloud storage!

Synthtopia: It seems like there were quite a few upsides to the iPad & Gadget combo for you. What are the downsides to doing a project like this on an iPad?

From the point of view of the Inhumanity soundtrack, I really can’t think of any major downsides. The whole setup just gave me so much freedom and this freedom inspired me so much.

I can understand that some composers work best being rooted to just one location. Before this soundtrack, I would have said I was the same. But it seems a constant change of scenery really works for me.

Actually, I’ve just thought of a downside: there were a few times when I was working remotely without power and either my iPad or iPhone died on me.

Luckily, I didn’t lose any work, but when you’re in the moment and that happens, it’s like the end of the world. I now carry a powerbank with me wherever I go.

Synthtopia: I’ve asked you a lot of tech-related questions – what about the music itself? Can you tell us about the musical ideas you wanted to use or explore on the soundtrack?

Tony Longworth: Well, from early on I wanted to create themes for various characters in the movie, not theme tunes as such, but certain sounds for a particular character, a certain feeling for them.

As soon as the killer is on screen, the audience needs to know that, not just visually, but they need to have that feeling. I wanted to do that for all the main players in this movie.

Thanks to Gadget being so vast and versatile, I had so much scope to play with and I think I succeeded in making this a reality. I’m really proud of this soundtrack and the movie itself, it all came together so well.

Synthtopia: There was a peak of synths being featured in soundtracks in the 70’s and 80’s, especially in horror and genre films. Synths offered a huge palette of sounds, on a relatively small budget. And a lot of those scores – like the work of John Carpenter or Brad Fiedel – hold up very well.

How do you see scoring Inhumanity on an iPad falling into that tradition?

Tony Longworth: Retro synth soundtracks are making a comeback in movies these days. I mean, the movie Halloween is getting a reboot and with it a brand new reimagining of the theme by John Carpenter himself.

I do like to find movies with more non-traditional soundtracks and there’s a lot of them out there that are so alternative but work so well. Just listen to some of Trent Reznor’s soundtrack work, stunning stuff, and as you mentioned, Brad Fiedel’s work on the Terminator franchise.

My whole goal behind creating a movie soundtrack is to bring something different to the mix.

Synthtopia: Now that you’ve scored a film with an iPad, would you want to do it again?

Tony Longworth: Oh, most definitely. Now that I’ve done it once, and it worked like a dream, there’s no reason at all that I won’t be using Gadget for future movie scores.

To be able to score wherever I am is just amazing.

I’m currently working on new music for my bands Flesh-Resonance and Captain Creep using Gadget, again I’m writing when I’m out and about, not just in my studio, and yes, I’m writing in bed, too.

Tony Longworth: The best place to start is my website, which has all the latest news and links to everything. You’ll find all my music, including the Inhumanity soundtrack, on iTunes, Spotify, Google Play, Amazon, CD Baby – basically most places you can stream or get digital downloads from.

You can now stream the movie on Amazon Prime and iTunes, as well order it from Amazon, Best Buy, Family Video and Grindhouse Video and you can buy it in-store at Walmart.

Please also check out my Patreon music page. The people who fund me there get all my new music first, before it’s released free to everyone. There are some Gadget creations over there, too, so make sure to check it out.

Synthtopia: Tony, thanks for taking the time to tell us about your work!

Tony Longworth: It’s been my pleasure. Thanks for your interest in our movie and my music!

23 thoughts on “First Film Scored On An iPad – Inhumanity”