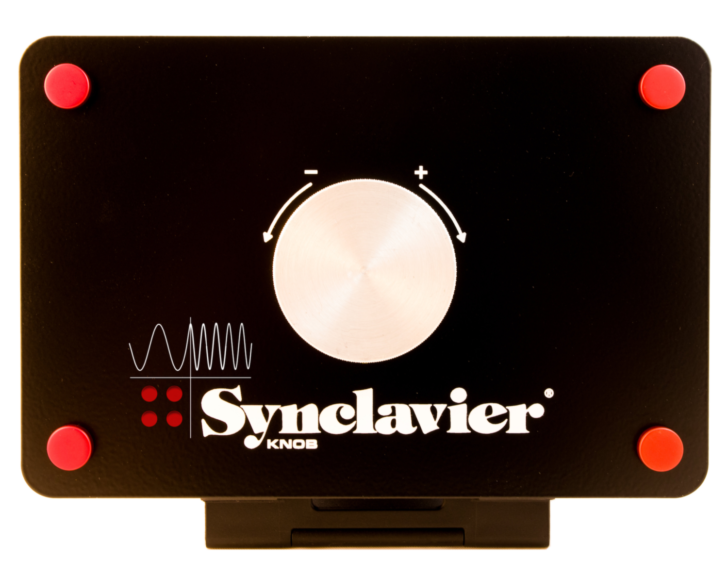 Synclavier Digital has announced the availability of the standalone Synclavier KNOB — a re-creation of the original knob central to the seminal Synclavier II Digital Synthesizer’s interface.

The Synclavier KNOB is a USB device, designed to compliment the Canadian corporation’s Synclavier Go! and Synclavier Pocket! iOS apps. Like the apps, the KNOB has a 40+ year history behind it.

Here’s what Synclavier has to say about it:

“During development of the first Synclavier prototype, I remember Sydney Alonso brought me a sheet of aluminum with a bunch of knobs on it,” says Synclavier co-inventor Cameron Jones. “I took one look at it, and said, ‘No, this isn’t going to work! Why can’t we have just one knob?’”

So, rather than have a small knob for every parameter, like most of the analog synthesizers of the time, the Synclavier was to have one large, feel-good knob, which controlled whichever parameter was active at any given time.

Synclavier shared details on the KNOB – and some of the reasoning behind their obsessiveness in recreating it:

“It had to feel the same,” states Cameron Jones, before continuing: “I didn’t want to disappoint users of the original system. Many people have built their careers using my hardware, and that makes me happy.”

When a prototype was showcased alongside Synclavier Go! and Synclavier Pocket! earlier this year at The 2019 NAMM Show in Southern California, “…some people were visiting our booth just to see the Synclavier KNOB.” So says Synclavier’s Craig Phillips, semi-seriously adding: “It might be the most expensive knob in the world; it’s certainly the most expensive pitch-bend wheel we know about! People asked, ‘What’s it all about?’ I joked, ‘It’s a knob; it turns left or right.’ But then I went on to explain the finer points, because there’s obviously a lot more to it.”

Indeed there is. Speaking specifically, Synclavier KNOB is a precision rate-of-change controller. It is spring-loaded; let go and it returns to the centre. Connect it to those respectively remarkable — and remarkably priced — iOS apps and that is when those touchy-feely, magical movements make all the difference. When users start to turn the Synclavier KNOB, it affects whichever parameter they have selected from those red backlit buttons on their iPad- or iPhone/iPod Touch-hosted Synclavier Go! or Synclavier Pocket! And as they turn the Synclavier KNOB further, the tension they feel increases accordingly — as does the rate at which the selected parameter increases or decreases, allowing them to speedily and accurately reach their desired value. As a result, Synclavier KNOB naturally feels good when being put to good use — just like the original knob central to the seminal Synclavier II Digital Synthesizer’s speedy control surface.

Synclavier KNOB has been intelligently designed, too. The same hysteresis algorithms associated with the original knob are also applied to this new re-engineered re- creation. Reality dictates that time and tide waits for no-one, however. Smarter software dictates how Synclavier KNOB changes any selected parameter’s value; in effect, the Synclavier KNOB ‘knows’ how to increment (or decrement) each parameter in an appropriate way — whether by tens, units, or decimals. Deeper still, selecting the (Fine) button in Synclavier Go! makes Synclavier KNOB even more sensitive to movements.

14 thoughts on “Synclavier KNOB – ‘One Large, Feel-Good Knob’ That Controls Everything – Now Available”