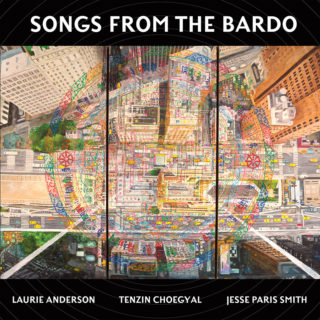 Smithsonian Folkways has announced a new album, Songs From The Bardo, from the trio of avant-garde icon Laurie Anderson, Tibetan multi-instrumentalist Tenzin Choegyal, and composer and activist Jesse Paris Smith.

Songs from the Bardo is a guided journey through the visionary text of the Tibetan Book of the Dead, unfolding in an 80-minute ebb and flow of sound and words.

Songs from the Bardo is a transporting experience, meant to draw the listener into the present moment and provide a framework for inner exploration.

Anderson, Choegyal, and Smith fuse modern compositional techniques with the mystique of Tibetan Buddhist philosophy to make these visionary traditions more accessible to a new generation of listeners and to reveal the ancient wisdoms contained within.

The album is available to pre-order now and will be released Sept 27. You can preview the album below: