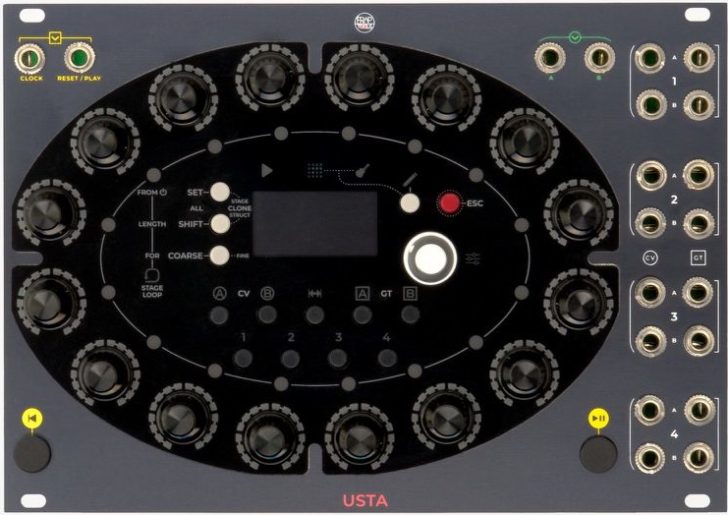 USTA is a 4×4 tracks sequencer for voltages and gates with variable stage duration, designed to let you quickly see and edit multiple voltage relationships in real-time. “Variable stage duration” means that every single stage duration can be individually set in relation to the clock, instead of being constrained to a one-to-one ratio (i.e. one stage per every clock impulse).

“4×4 tracks” means that every stage can store and generate up to four separate voltages (two CVs and two gates) and that up to four independent stage sequences can be arranged into as many different tracks.

Here’s an official demo of the USTA sequencer in action:

The USTA’s architecture is based on an array of 16 ‘Stages’ which form a ‘Pattern’; 16 patterns form a ‘Track’, and four tracks form a ‘Project’.

Within each track, each stage can provide two gates and two CVs, and a wide set of options is available to define and modify the value of each output (‘Layers’) and the way it is played (‘Colors’).

Every Stage is related to a dedicated stepped encoder for quick and intuitive editing, and all the 16 encoders are arranged in an oval layout with a circular playhead. Every encoder is surrounded by a ring of 16 LEDs and an RGB led, to provide visual feedback of the current setting of that step based on the layer you are working on (raw CV, quantized CV, length, gate…) and the way it should play depending on the RGB color.

The duration of each stage of the sequence can be individually set: this makes syncopation and polyrhythmic structures easy to achieve without “wasting” steps.

The stage length is measured in units (0 to 16), whose duration is determined in relation to the clock tempo (Time Ratio): this allows immediate clock divisions or multiplications, from one unit every 24 clocks to 8 units per clock). The clock can be either internal or external and its tempo can be individually set per each of the four tracks.

A swing ratio from 1 to 75% allows more experimental rhythmic structures.

16 push rotary encoders let you define the value of each stage: fine and coarse editing is achieved through modifier buttons, which also allow you to set multiple stages to the same value or to transpose them at once.
‘Clone’ functions allow cloning single stages or structures of stages, as pattern, channels or entire tracks.
Asynchronous output monitoring is available, in order to write down a sequence when the device is stopped.
A touch of variability can be added and the resulting micro-variations can be stored to new patterns.

The stages can be independently set to work in ‘Slide’ mode, adding a linear integration from the previous value to the current one in a sort of portamento or glide effect.

The gate can be held high for the whole stage, which combined with the slide option creates very expressive legato-like behaviors.

1 to 16 gates can be fit into each stage’s duration, for a very intuitive and flexible ratcheting effect.

Each of the 8 CV channels in USTA can be set to work in high-resolution raw voltages or finely tunable quantized semitones (notes).

Raw mode lets you define a precise voltage per each stage, editing it in steps down to 1 mV.

Furthermore, the pitch mode lets you choose root and scaleand force your sequence to that scale, even after pseudo-random variations or pitch shifting.

The pattern sequences can be endlessly modified for ever-changing performances through alternative arrangements, live recalling and custom loop points. It’s possible to loop the current pattern, the last one or all the patterns, as well as to play in one shot only the current pattern or the whole sequence.

The Stage Loop lets you define a parallel cross-pattern loop section with a flexible starting point, length and duration.

With the USTA, you can simultaneously address the CV inputs to multiple targets, even across different tracks. These modulations routings use external voltages as an offset to shift the defined values:

By default, USTA operates within the standard Western 12-tone temperament. But you can change this configuration independently per track, and choose other octave division such as 15, 19, 22 and 24 tones per octave, thus diving into the realm of microtonal music.

All the features of quantization, glide and pseudo-randomization are still available.

You can also create a custom scale mask, by creating a .csv file and loading it into USTA’s SD card.

You can create up to four user scales/per octave division. This means that you can create four scales for the 12 EDO quantization, four for the 15 EDO, and so on.

In case this is not enough either, it is possible to create other .csv files for custom temperaments and tunings per each octave division, thus finely regulating each interval of the scale mask.

USTA has many tools you can take advantage of:

The USTA is available now, priced at 749€ incl VAT.