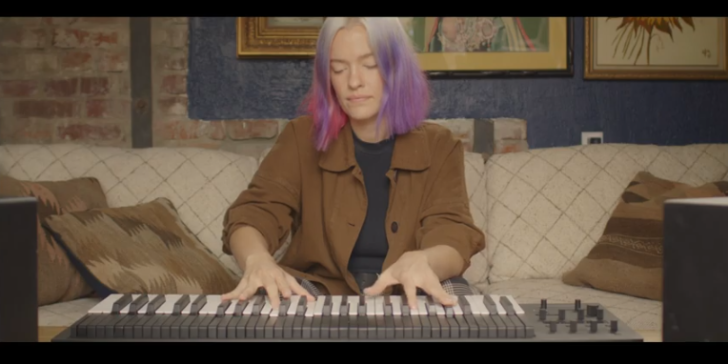 Osmose pairs an entirely new expressive keyboard mechanism, called A.K.A.©, with the EaganMatrix sound engine by Haken Audio, that was specifically designed for expressive electronic instruments. The company says that Osmose enhances the synth players’ interaction with the keys, “making the player one with the sound.”

Osmose offers the musician an elevated experience by introducing a new landscape of physical gestures, allowing them to interact with sounds, producing music like they never have before. Osmose developers explain that “It does this while not only respecting, but also enhancing the player’s existing keyboard skills.” Every note can be articulated independently with unique expressive possibilities.

Here’s an overview of the expressive performance options:

A patented mechanism that delivers three dimensions of control on every single key makes these gestures possible. This new technology is named A.K.A., short for Augmented Keyboard Action.

Expressive E took an Osmose prototype to Los Angeles several weeks ago, to show the keyboard to a number of artists there. Here’s a look at the reactions from Ron Avant, J3PO, Peter Dyer, Jordan Rudess, Bill Laurance, Kaela Sinclair, and Virtual Riot:

How does it work?

Osmose developers explain: “The objective behind Osmose is to create an instrument that provides new expressive playing possibilities that keyboard players have always desired. Achieving that objective requires a perfect union between an expressive keyboard mechanism and a sound engine. Consequently, Expressive E has partnered with Haken Audio to integrate its powerful EaganMatrix sound engine into Osmose.”

Built for instruments with continuously expressive gestures such as the Continuum Fingerboard, the EaganMatrix is arguably the most powerful expressive synthesizer on the market. Its modular sound engine combines many types of digital synthesis, including physical modeling, additive, subtractive, FM, virtual analog, granular and spectral synthesis.

Here, Edmund Eagan, creator of the EaganMatrix explains what all of this means:

Osmose’s large library of editable internal sounds are all custom-made to take advantage of Osmose’s expressive A.K.A. technology. The diverse sound set of highly detailed acoustic and electronic sounds, from raw synths to smooth organic textures, were carefully crafted to react to a player’s slightest movements. Each Osmose preset makes use of the keys’ three-dimensional sensitivity in a unique way to create effects such as strummed notes, vibrato, legato, layered dynamics and much more.

Osmose can also interface with computers and other instruments, as a MIDI controller with support for MPE and MPE+ sounds, polyphonic aftertouch, a Multichannel MIDI mode, and global pitch bend controllable from every key. The user can also configure the Osmose as a standalone MIDI controller from the onboard display, with no need to connect to a computer.

Using Osmose as a MIDI Controller:

In addition to the A.K.A. expressive keys, the musician can radically change a sound’s timbre, texture, harmonics and effects directly and intuitively with Osmose’s front-panel macro controls. “For the ultimate performance experience,” the mod wheel and two continuous pedal inputs can also adjust the macros. The Osmose user can even adjust the sensitivity of the keyboard’s three control dimensions.

For more information about Osmose, including musician and technical videos, visit the Expressive E website.