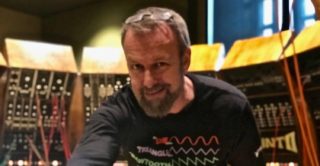 Sound design rock star Francis Preve (Ableton, Korg, Roland, Sequential and others) is featured on the latest episode of The Listening Podcast.

You can listen to the interview via the embed below, on Spotify or Apple Podcasts:

With a career that includes designing sounds for Ableton, Dave Smith, Korg, Roland, and Xfer, plus serving as Technology Editor for Beatportal.com, Francis Preve has carved a niche as one of the tech industry’s most in-demand sound designers. His work as a college professor in Austin, Texas, provides additional insight into how musicians of all skill levels interface with synthesizers, while his career as a technology journalist gives him a deeper appreciation of great product design and development.O

Over the years, Preve’s musical output has included remixes for Dragonette, Orbital, Gabriel & Dresden, Sander Kleinenberg, and Dave Seaman. His original productions include collaborations like “Yin/Yang” with Wolfgang Gartner, “Glow Ballz” with Matt Lange, and “Get Down” with John Acquaviva & Olivier Giacomotto. He is also the founder of Symplesound, a soundware company focused on creating intuitive instruments and presets.In 2017, Preve introduced his Scapes artform—entirely synthesized recreations of field recordings—which got the attention of the immersive sound design industry. He has presented and/or moderated panels on sound, synthesis, and production at conferences including SXSW, MacWorld, O’Reilly, and Project BBQ.

3 thoughts on “Francis Preve on The Listening Podcast”