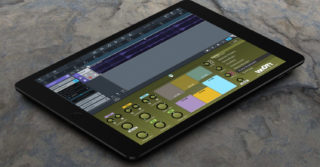 Woott is a “multiband dynamics plugin with simultaneous downward and upward compression”.

Bos says that what it does is slam the dominant parts of your synth sound and then amplify the quiet details to giant proportions. The result is that your sounds become ‘massive and aggressive’.

“It’s based on the OTT dynamics preset from Ableton, which has become a staple EDM/DnB/Neuro-production effect in the desktop world,” explains Bos. “I have used that as a starting point for creating something similar for iOS. So it’s not a 1:1 clone, but it will do the same things: make huge monstrous growling basses and leads, manipulate sampled breakbeats and loops, enhance timbral/filter movements in synth sounds, etc.”